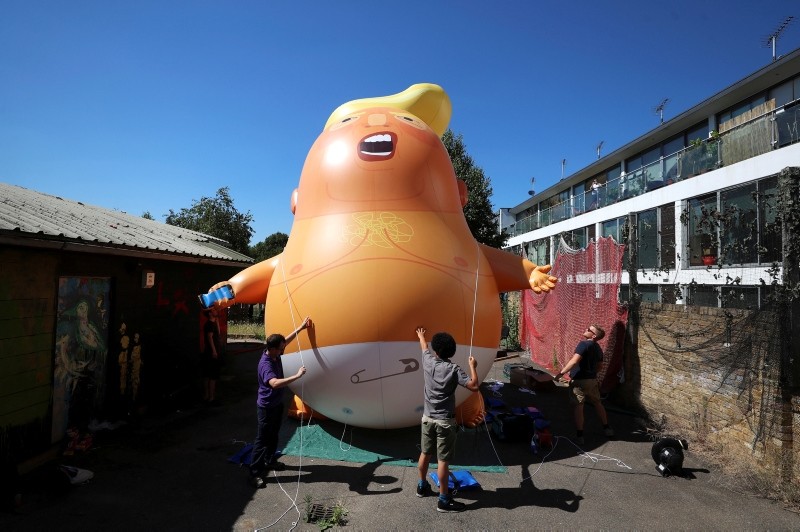 People inflate a helium filled Donald Trump blimp which they hope to deploy during The President of the United States' upcoming visit, in London, Britain, June 26, 2018. (REUTERS Photo)
by Jun 27, 2018 12:00 am

British opponents of Donald Trump on Tuesday inflated a six-meter snarling orange inflatable baby blimp, complete with tiny hands and a nappy, that they hope to launch over London to mock the U.S. president when he visits next month.

Trump will meet Queen Elizabeth and Prime Minister Theresa May, who was the first foreign leader to visit Trump after his inauguration in January 2017.

Britain regards its close ties with the United States, which it calls the special relationship, as a pillar of its foreign policy as it prepares to leave the European Union.

But some Britons see Trump as crude, volatile and opposed to their values on a range of issues. British officials have also been dismayed by some of Trump's pronouncements, particularly a U.S. entry ban targeting several Muslim-majority countries.

"When Trump visits the U.K. on Friday the 13th of July this year, we want to make sure he knows that all of Britain is looking ... and laughing at him," the crowdfunding page said.

"That's why a group of us have chipped in and raised enough money to have a 6-meter high blimp made by a professional inflatables company, to be flown in the skies over Parliament Square during Trump's visit."