2,900 French police in search for convict after daring helicopter escape 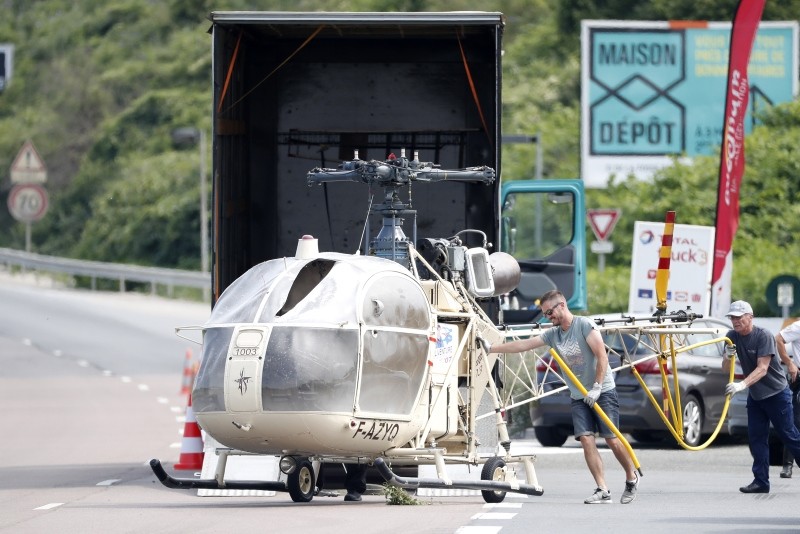 Investigators trasnport an Alouette II helicopter allegedly abandoned by French prisoner Redoine Faid and suspected accomplices after his escape from the prison of Reau, in Gonesse, north of Paris, France, 01 July 2018. (EPA Photo)
by German Press Agency - DPA
Jul 02, 2018 12:00 am

Some 2,900 French police and gendarmes were Monday searching for a convicted armed robber, the Interior Ministry said, a day after a helicopter-borne commando sprung him from a jail south of Paris.

Justice Minister Nicole Belloubet said that drones had been seen above the prison in recent months and it was possible that they had been used to plot Redoine Faid's escape.

Faid escaped on board a helicopter that landed in the prison's front courtyard, an area to which detainees reportedly have no access.

It was the only open area in the complex not covered by wiring that would prevent a helicopter from landing.

The gunmen on board then broke down the door to the visiting room where Faid was meeting one of his brothers.

The escape was over in minutes, with no injuries and no hostages taken, according to the Justice Ministry.

Belloubet told broadcaster Europe1 that she had ordered an investigation into the getaway of Faid, who was serving a 25-year sentence for a 2010 robbery in which a policewoman was killed.

It was not his first such escape.

In 2013, while detained awaiting trial for the 2010 robbery, he blasted his way out of a prison near Lille with explosives after taking four guards hostage.

The guards were released shortly afterwards.

That time, he was recaptured six weeks later, and last year received a 10-year sentence for the escape.

According to newspaper Le Parisien at the time, he told the court trying him that he regretted the escape and its impact on the guards he had taken hostage, saying: "If I was in that position again, I wouldn't do it."

"Clearly, you need a lot of inventiveness and a sort of unshakeable willpower to pull off an escape like this," she added.