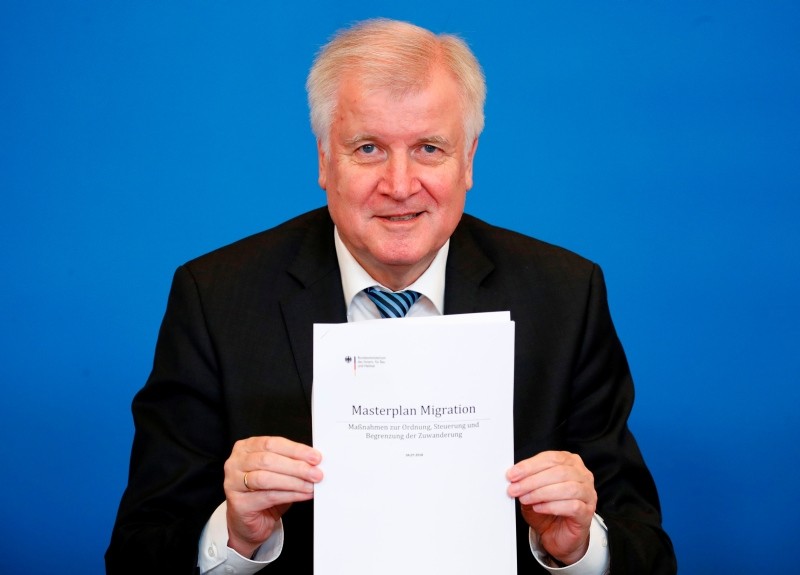 German Interior Minister Horst Seehofer poses with a copy of a ,Masterplan on Migration, during a press conference in Berlin, on July 10, 2018. (AFP Photo)
by Compiled from Wire Services
Jul 10, 2018 12:00 am

German Interior Minister Horst Seehofer noted that 69 failed asylum seekers were deported to Afghanistan from the country on his 69th birthday - but said it wasn't a birthday wish.

"Exactly 69 were taken back to Afghanistan on my 69th birthday - it wasn't on my orders," Seehofer said with a smile on Tuesday.

"It's much more than has been usual thus far," the hardline minister said, following the presentation in Berlin of a migration masterplan that aims to accelerate repatriations while offering financial assistance to the countries involved.

Germany has returned a large number of migrants to Afghanistan over recent weeks, provoking anger in Kabul, where officials maintain there is an agreement with Germany on an upper limit of 50 passengers per flight.

The latest deportations on July 4 - Seehofer's birthday - made up the largest group since Germany began direct deportation flights to the war-torn country in December 2016.

The main goals of the 63-point "migration master plan" include the quick deportation of people living in Germany whose asylum applications have been rejected, who already registered for asylum in another European country or who have a criminal record, Seehofer told reporters in Berlin.

Seehofer, who has long pushed Chancellor Angela Merkel to take a harder line against migrants, said the new plan also envisions placing all asylum-seekers in big centers to have their applications processed there. Asylum-seekers currently are mostly distributed to small asylum homes across the country, though some states have already introduced centers where hundreds of applicants need to stay for months while awaiting decisions.

The new plan also foresees that asylum applicants who previously registered in another EU country will be taken directly back to where they first entered the EU — primarily Greece and Italy.

That issue had led to a clash between Seehofer and Merkel, who repeatedly insisted that Germany shouldn't act unilaterally by sending back asylum seekers to other European countries that would then have to bear the biggest burden of the influx. The controversy ended last week with a compromise in which Germany will have to make agreements with affected countries before sending back asylum seekers there.

"We prefer European solutions, but national solutions are not necessarily superfluous," Seehofer said.

More than 1 million migrants entered Germany in 2015-2015, most of them from war-torn countries like Syria, Afghanistan and Iraq. While they initially received a friendly welcome in the country, the mood has turned and led to a backlash against migrants and helped fuel the rise of the nationalist Alternative for Germany. In the last two years, however, the numbers of newly arriving migrants in Germany have gone down sharply.

Seehofer's office reported Tuesday that the country saw a 16.4-percent decline in asylum applications in the first half of 2018 over the same period last year.

There were 93,316 formal applications from January through June, 18,300 fewer than in the first half of 2017. The largest group seeking asylum was from Syria, with 22,520 applications, followed by Iraq with 9,015 applications and Afghanistan with 6,222.

In the first six months, German authorities decided on 125,190 applications, down nearly 70 percent from the same period of 2017, an indication that the backlog of cases is starting to be cleared.

About 40,000 people were granted asylum or related protection, 45,000 were rejected and 40,000 cases were otherwise resolved, such as being withdrawn or sent to another European country for review.