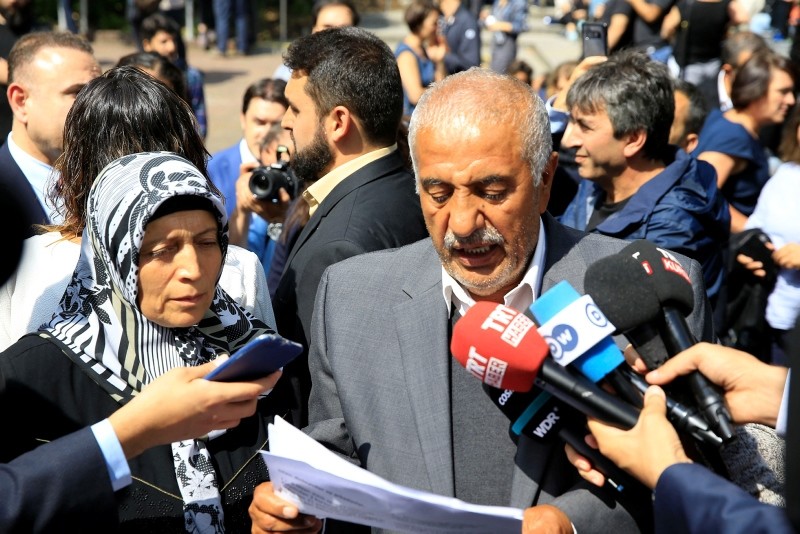 The families of neo-Nazi murder victims slammed light sentences handed to far-right extremists by German court, and accused authorities for trying to cover up the unresolved killings of Turkish immigrants.

Ismail Yozgat and his wife Ayşe Yozgat, whose 21-year-old son was killed by the NSU in 2006, appeared devastated when they left the courthouse on Wednesday.

"We do not accept this ruling," Ismail Yozgat told reporters, and heavily criticized the court for not carrying a deeper investigation.

Yozgat said former intelligence officer Andreas Temme was at the scene when his son Ismail Yozgat was killed, but the court did not seriously investigate Temme's possible role.

He also accused Chancellor Angela Merkel for not honoring her promise to uncover all the facts about NSU murders.

"They covered up the guilt of intelligence officers like Andreas Temme, they destroyed evidences. They have done nothing to relieve our pain," he said.

Munich's Higher Regional Court announced on Wednesday its long awaited verdict on the killing of eight Turkish immigrants, a Greek citizen, and a German policewoman by the far-right terrorist group the National Socialist Underground (NSU).

The court sentenced chief suspect Beate Zschaepe to life in prison, which is normally 15 years in Germany, and other four suspects were given light sentences.

Despite serious question marks about the role of former spy Andreas Temme and dozens of other informants, they were not indicted.

Gamze, the daughter of Mehmet Kubaşık, who was killed by the NSU in 2006, has welcomed the life sentence for chief suspect Zschaepe, but criticized the shorter sentences for other neo-Nazis.

"I am extremely disappointed and extremely sad for the lighter sentences for the NSU's supporters Andre Emminger and Ralf Wohlleben," she told reporters.

Surprising many observers, the Munich court announced two years and six months for Emminger, who rented caravans for the group which were used during the murders in 2000-2007.

The prosecutors had demanded a 12-year sentence.

Several far-right extremists in the courtroom cheered and applauded the ruling, which enabled his early release.

Two other suspects -- Holger G. and Carsten S. -- who admitted providing support to the group in the past and cooperated with the police, also got lighter sentences.

Ralf Wohlleben, a main supporter of the terrorist NSU who was charged with providing the gun used in the murders, was sentenced to 10 years in prison, two years less than prosecutors sought.

"Today is a good day for the Nazis," he tweeted, after the court announced its verdict.

The NSU killed eight Turkish immigrants, a Greek citizen, and a German policewoman between 2000 and 2007, but the murders remained long unsolved. The group also carried out bomb attacks targeting shops owned by immigrants in Cologne.

The German public first learned of the group's existence and its role in the murders in 2011, when two members -- Uwe Mundlos and Uwe Bohnhardt -- died after an unsuccessful bank robbery and police found guns and extreme-right literature in their apartment.

During the five-year trial, Zschaepe denied any role in the killings and bomb attacks and tried to lay the blame on her two late colleagues in the far-right terror cell.

As the 43-year old declined to give any insight about the NSU, major questions over the murders remain unanswered.

The scandal surrounding the neo-Nazi NSU has led to criticism of police and security agencies, and accusations of institutional racism.

Until 2011, Germany's police and intelligence services ruled out any racial motive for the murders and instead treated immigrant families as suspects, questioning them over alleged connections with mafia groups and drug traffickers.

While recent revelations have shown that Germany's domestic intelligence agency had dozens of informants who had contacts with the NSU suspects, officials insisted that they had no prior information about the NSU terror cell and its suspected role in the killings.