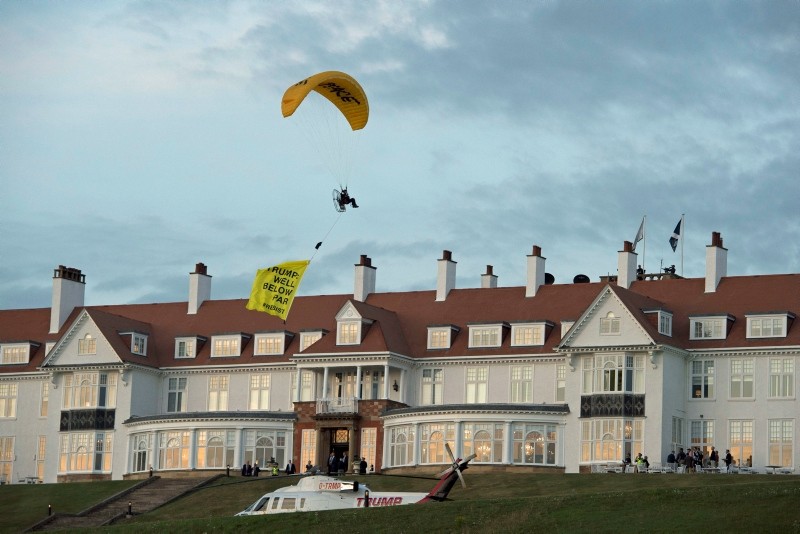 In this Friday, July 13, 2018 photo, a Greenpeace protester flying a microlight passes over US President's Donald Trump's resort in Turnberry, South Ayrshire, Scotland. (AP Photo)
by Compiled from Wire Services
Jul 15, 2018 12:00 am

A 55 year-old man has been arrested following a protest at U.S. President Donald Trump's golf course in Scotland on Friday, Scottish police said, after a an activist used a powered parachute to get within a few hundred yards of the president.

"Police Scotland can confirm that a 55-year-old man has been arrested in connection with an incident when a powered parachute was flown in the vicinity of the Turnberry Hotel around 9.45 pm on Friday," a police statement said.

The glider carried a banner reading "Trump: Well Below Par" to protest his environmental and immigration policies. Greenpeace, in a statement, claimed the protest forced the president to take cover, saying "as the glider appears overhead, the president can be seen making for the entrance, breaking into a trot."

The environmental group said it had told police about the stunt 10 minutes before the glider arrived.

On the eastern side of Scotland, dozens of others protested Saturday outside Trump International Golf Links in Aberdeen. One woman climbed onto a wall surrounding the golf resort but was helped down by police.

A much larger demonstration was staged in Edinburgh, where 10,000 people weaved through the capital's streets in an anti-Trump protest as amused tourists looked on and motorists beeped their horns in support. A choir, a bagpiper, a tambourine band and poetry readings added to the carnival spirit.

Protesters launched into the sky a 20-foot (6-meter) tall blimp depicting Trump as an angry orange baby holding a phone for tweeting. The same "Baby Donald" balloon flew Friday over anti-Trump protests in London, where thousands crammed the streets of the British capital to vent their anger over Trump's first official visit to Britain.