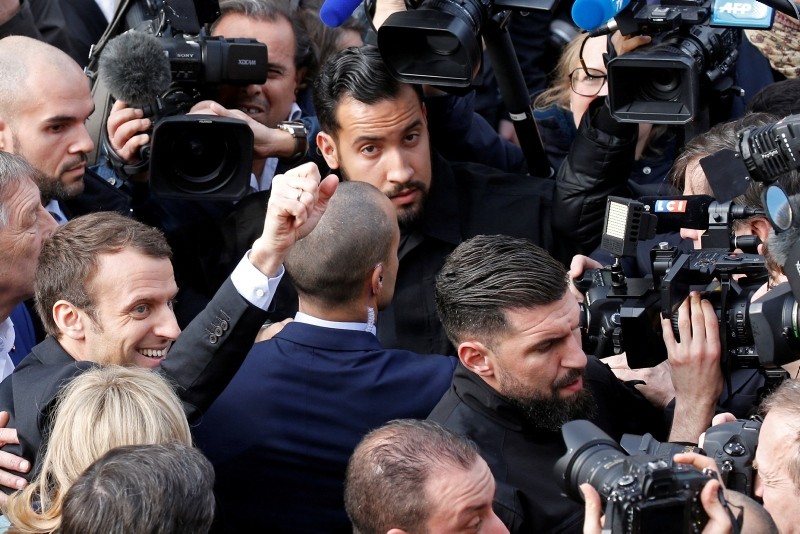 Emmanuel Macron (L), flanked by Alexandre Benalla (top), head of security, waves as he arrives to visit the birthplace of novelist Alexandre Dumas in France, March 17, 2017. (REUTERS Photo)
by Compiled from Wire Services Jul 20, 2018 12:00 am

A top security aide for President Emmanuel Macron, caught on camera beating a protester, has been detained and is being questioned by authorities.

A judicial official said Friday that Alexandre Benalla is being questioned on an array of counts ahead of potential charges. Among the counts is violence committed in a group by a person with a public service mission. The official spoke on condition of anonymity because of the ongoing investigation.

French media reports, meanwhile, indicate that the process to fire Benalla from his job has begun.

Macron's office said the decision to fire Benalla was taken after "new elements" emerged in the case, which has become the most damaging scandal facing the centrist president since his election last year.

A source close to the inquiry said three police officers have also been suspended on suspicion they provided Benalla with surveillance footage of the May 1 demonstration in an attempt to prove his innocence.

"He is suspected of receiving material from the police he was not authorized to have," the Elysee said.

The scandal erupted this week when French daily Le Monde published a video taken by smartphone showing Benalla, wearing a police helmet, manhandling and striking a protester during a May 1 demonstration.

In a second video published by the newspaper late Thursday, Benalla -- who has never been a policeman -- is also seen violently wrestling a young woman to the ground.

It was not clear who informed Benalla's superiors of the incident, but a few days later he was suspended without pay for two weeks and transferred to an administrative role instead of organizing security for Macron's trips.

But the incident was not reported to prosecutors.

The affair is particularly embarrassing for Macron since he won the presidency with pledges to restore transparency and integrity to the nation's highest office.

Adding to the controversy, Le Monde reported Friday that despite his suspension Benalla was given this month a prestigious government-owned apartment in the chic Seventh Arrondissement.

He is also being provided with a car and driver, the paper reported.

The BFM news channel meanwhile reported that Benalla was back on duty doing security work this week, traveling on the bus carrying France's World Cup-winning football team down the Champs Elysees for a victory parade.

Newspapers on Friday assailed the president's refusal to address the scandal despite repeatedly being questioned by journalists during a visit to southwest France on Thursday.

"By not immediately managing a disciplinary problem, Emmanuel Macron now faces a political crisis," wrote the rightwing Le Figaro daily -- which usually makes no secret of its admiration for the president.

Just days after the May 1 demonstrations, which were marred this year by anarchists who clashed with police, Macron tweeted that "everything will be done so that those responsible will be identified and held accountable for their actions."

Interior Minister Collomb confirmed in parliament Thursday that Benalla had "no right to intervene" at the gathering of leftwing student protestors on the Rue Mouffetard, a picturesque Left Bank street loved by tourists.

The case has also prompted unflattering accounts of Benalla's behavior from other officials who have worked with him.

Arnaud Montebourg, a former minister in ex-president Francois Hollande's government, recalled dismissing Benalla from his service after just a week because of a "serious professional failure."

"He caused an accident while acting as my driver and tried to flee the scene," Montebourg told Le Monde on Thursday.

The scandal comes with Macron's popularity at a record low, defying analysts' expectations of a post-World Cup bump -- with an approval rating of just 39 percent in a BVA poll carried out on Wednesday and Thursday.