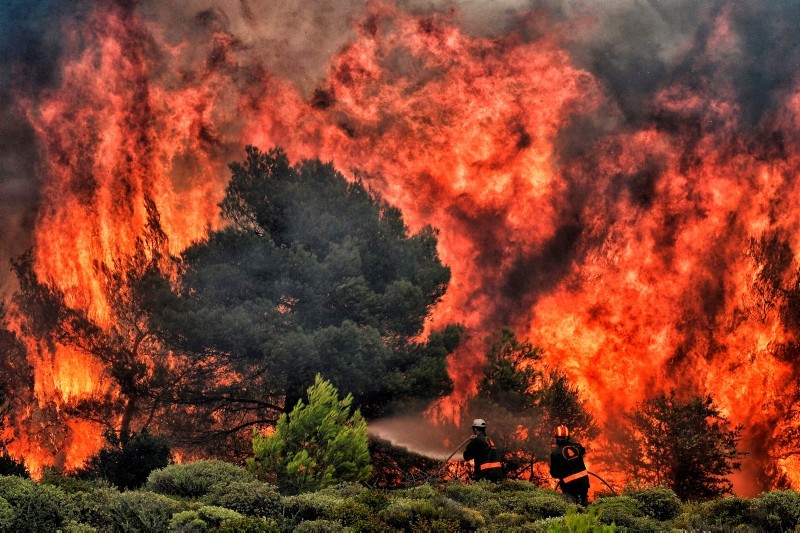 A Greek cleric on Wednesday said "atheist" Prime Minister Alexis Tsipras was to blame for the devastating wildfires that left at latest 81 people dead.

"The atheist prime minister Alexios Tsipras... is drawing the wrath of God! Greece is being destroyed by rains and... fires!," Amvrosios, Bishop of Kalavrita and Aigialeia in southern Greece's Peloponnese region, wrote on his blog on Tuesday.

Amvrosios, whose name is Athanassios Lenis, said Tsipras and his atheist "collaborators" are the causes of the general catastrophe.

"The great fire has started by a lightning at the Gerania Mountains! It is a very clear celestial message!," he said.

Amvrosios said Tsipras has not said any word about the God and just a sentence of pray could have extinguished all the wildfires.

Archbishop of Athens and All Greece Ieronymos II criticized the statement of Amvrosios on Wednesday and called it a "sad" phenomenon.

"Personal opinions have a limit," he added.

Ieronymos added that God means love and God does not take revenge.

On Monday, two fires broke out on the east and west coasts of the country's Attica region -- home to capital Athens -- causing the death of 81 people and injuring more than 170.

The fires in Greece have forced thousands of locals to flee to safer areas as firefighters battle the blazes.

Bishop Amvrosios had also labeled gay people the "dregs of society" and called on his followers to "spit on" and "blacken" them in a written address in 2015.

He was charged with public incitement to violence and abuse of ecclesiastical duties before being found not guilty and released by a court in the Peloponnesian town of Aigio early March.

The bishop has also been known to publicly appear alongside leaders of Greek neo-Nazi party Golden Dawn.