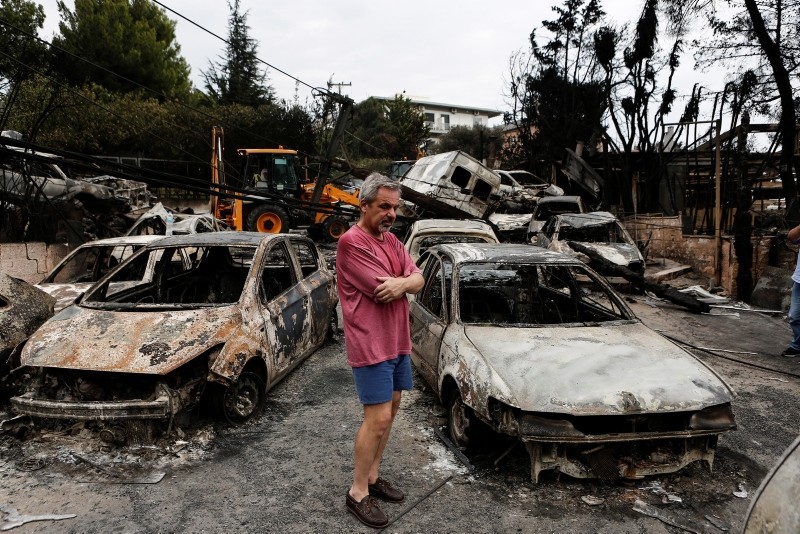 A "serious" piece of information indicates that "criminal acts" were behind a blaze that resulted in the deaths of most of the 82 people killed in the country's worst ever wildfires, a Greek minister said Thursday.

"For the fire that started in Mount Pentelicus" and spread to the coastal region of Mati, east of Athens on Monday, "there are a number of questions and I do not hide from you that a serious piece of information has led to us opening an investigation," Deputy Citizen Protection Minister Nikos Toskas said at a press conference.

He stressed that "climate conditions, extreme due to climate change," also contributed to the fire.

The death toll from the devastating blazes near Athens climbed to 82 on Thursday, fire officials said, as the search for the dozens still missing went on.

"We'll search every house," the spokeswoman for the Greek fire brigade said on television.

Distraught relatives of the missing were handing over DNA samples at the morgue in Athens where the remains were being identified. About 30 people remain unaccounted for.

All of the fires that had posed a threat to residential communities have been extinguished.

Fire officials have not said what caused the blazes to erupt on Monday, which were worsened by strong winds and high temperatures.

The mayor of the village of Penteli, located near the affected coastal towns, said he believes sparks from a downed power line ignited the fires.

Greek media have described the disaster as a "national tragedy", while Prime Minister Alexis Tsipras cut short a visit to Bosnia and announced three days of national mourning.

A young Irishman on honeymoon was among those who died, the British embassy in Greece confirmed.

According to British media, Brian O'Callaghan-Westropp had been on honeymoon in the coastal village of Mati when his car was caught in the wildfires.

Although his new wife Zoe managed to escape to a nearby beach, she was taken to hospital with burns, the reports said.

Apart from the Irishman, the victims included three other tourists -- a Polish mother and her son, as well as a Belgian national whose teenage daughter survived the blaze.

It is possible that some of those unaccounted for "will be among the victims", Maliri said.

When the fires broke out on Monday evening, terrified residents and tourists were overtaken by the flames in homes, on foot or in their cars.

Survivors have given harrowing accounts of fleeing the fast-moving blaze with only the clothes on their backs, as flames engulfed whole towns.

"My husband said we had to leave with our seven-year-old grandson," Kiriaki Alexiadou, a resident of the devastated village of Mati, told AFP.

"We ran to the car as the pine cones were burning on the trees."

Choking back the tears on Wednesday, she pointed to the charred skeleton of a house next to hers.

"The policewoman who lived there, her husband and their two children left on foot towards the sea but they were trapped by this wall of flame."

The burned bodies of 26 people, including small children, were discovered at a villa in Mati, 40 kilometers (25 miles) northeast of Athens, rescuers said.

At least six people died trying to escape the flames into the sea, where some 715 people were evacuated by boat, the government said.

"There was at least 300 of us. The worst thing was the smoke, it hurt to breathe," said Mati resident Sabi Kissov.

Rescue teams on Wednesday were going house to house to search for missing people in the village.

Volunteers were also doing the rounds to provide food to those whose houses survived relatively unscathed but which have experienced sporadic power cuts since the fire struck.

"In 40 years here we've seen several fires each year" in the hills where Monday's blaze broke out said resident Andreas Matsios. "But we never imagined they would ever reach Mati."

Rain is forecast for the coming days, which will help efforts to douse the flames after temperatures topped 40 degrees Celsius (104 Fahrenheit) on Monday.

But another blaze was threatening houses near the seaside town of Kineta, 25 kilometers west of Athens.

Dozens of firefighters were battling the flames around Kineta aided by helicopters and planes dropping thousands of gallons of water.

Some 187 people were hospitalized after Monday's fires, with 71 still being treated on Wednesday, including almost a dozen children, most of whom were in a "serious condition", the fire services said.

Shock was giving way to public anger Wednesday, with several media questioning how such a devastating blaze could have hit a country well used to wildfires.

The opposition Te Nea daily criticized the government's "inability to protext its citizens just a few kilometers from Athens".

The front page of the Ethnos newspaper showed a charred Greek flag with the headline: "Armageddon."

Tsipras chaired a meeting of his emergency management committee on Wednesday though no statement was issued.

"Today is a day of great sorrow for the Greek people and for all of Europe," The EU's humanitarian crisis manager Christos Stylianides said on Twitter.

The wildfires come as record temperatures in northern Europe have also seen blazes cause widespread damage in recent days.