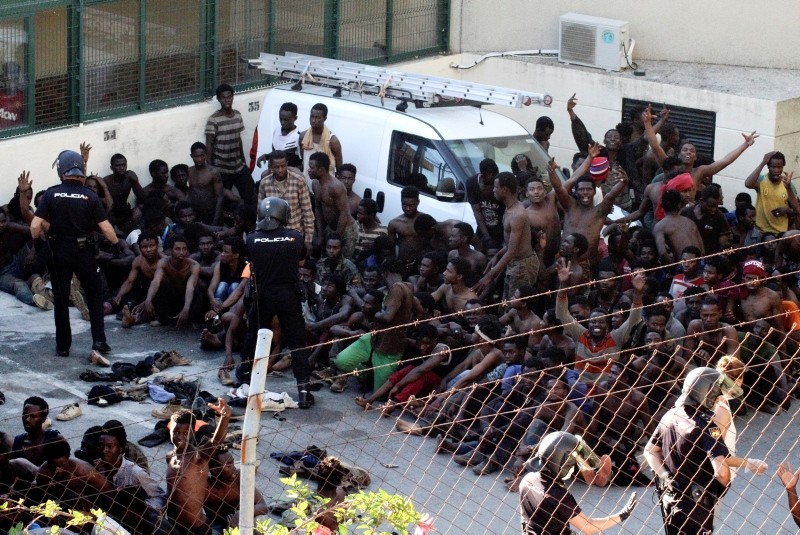 Several policemen keep watch over some of the 400 migrants that managed to jump off the border fence between Spain and Morocco in Ceuta, Spanish enclave in northern Africa, July 26, 2018. (EPA Photo)
by French Press Agency - AFP
Jul 26, 2018 12:00 am

Some 600 migrants from sub-Saharan Africa reached Spain Thursday after storming a double barrier between Morocco and the Spanish territory of Ceuta, with some attacking security forces with quicklime, police said.

The scramble over the barrier is the biggest in Ceuta since February 2017, when more than 850 migrants entered the overseas territory over four days.

It comes as Spain becomes the number one destination for migrants crossing the Mediterranean by boat, surpassing Italy with 19,586 arrivals so far this year, according to the International Organization for Migration.

A spokesman for the Guardia Civil police force in Ceuta told French Press Agency (AFP) the migrants managed to climb over the double barrier, which is covered in small blades, early on Thursday morning.

They scrambled over "all of a sudden, with much violence," and some attacked police with quicklime they had in tubes and bottles.

As a result, "more than a dozen police" were injured, four of whom had to go to hospital for burns in the face and arms.

Isabel Brasero, spokeswoman for the Red Cross, said they had to attend to 30 migrants with injuries, none serious.

Eleven of them were taken to hospital for stitches and possible fractures, she added.

She said that after they had climbed over the barrier, they ran to the center that houses migrants once they arrive in Spanish territory.

Ceuta and Melilla, another Spanish territory on Morocco's northern border, have the EU's only land borders with Africa, which is why many migrants try to reach them.