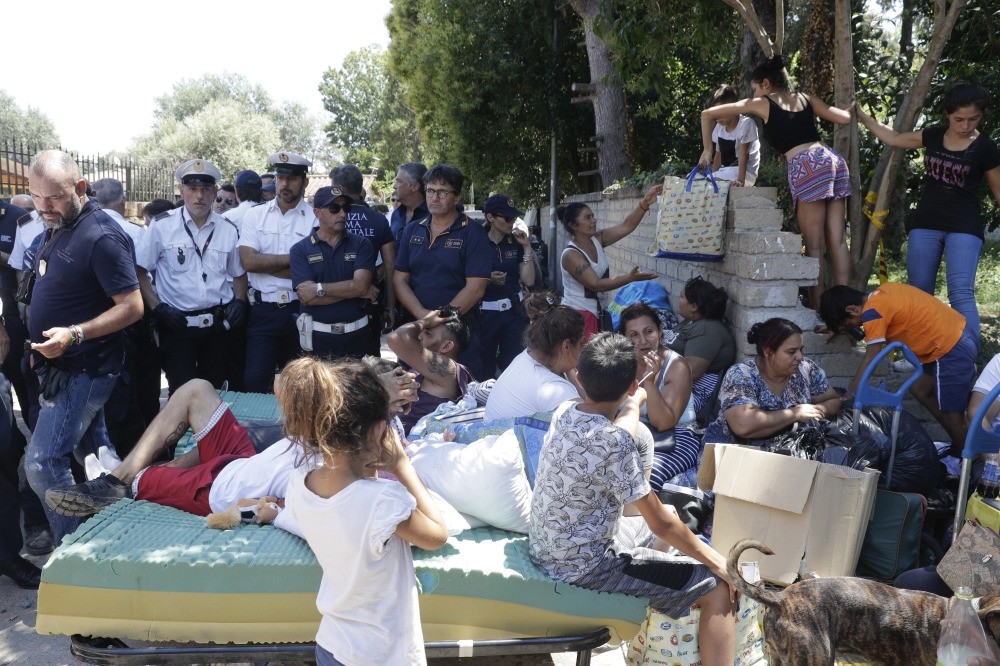 Italian police stand by evicted Roma people and their belongings outside the Camping River village, Rome, July 26.
by Compiled from Wire Services Jul 27, 2018 12:00 am

Defying the Europe human rights court's ruling to halt the clearing of a Roma camp, Italian police began evacuating about 300 Roma people who are subjected to grave discrimination under the far-right government

Italian police have begun clearing a shanty camp inhabited by members of the minority Roma community, despite a European Union court ruling halting demolition. Italian TV news yesterday showed dozens of people, including children, outside the camp in Rome, with mattresses and other belongings piled alongside vehicles.

The action came a day after Rome's mayor discussed the operation with Italy's new hardline interior minister, Matteo Salvini, who drew protests with his earlier calls for a census of Roma. A volunteer put the number of people remaining inside the camp after attempts to relocate them at about 370.

The European Court of Human Rights (ECHR) on Tuesday asked the Italian capital to suspend action until Friday and outline plans to rehouse the community. Rome authorities were due to evict them from the Camping River facility in the Italian capital on Tuesday, but were told to hold off until Friday. Some residents have also been offered money for voluntary returns to their country of origin, authorities said. Last week, Mayor Virginia Raggi traveled to Romania to meet some people who took up the offer.

The Camping River case follows pledges by Italy's new far-right Interior Minister and Deputy Premier Matteo Salvini to conduct a "census" on the Roma minority and expel large numbers of them. The remarks caused outrage because the idea of a census focused on a specific minority, is to many people, reminiscent of the Nazi persecution of Jews. Roma people were also victims of the Holocaust.

In June, Salvini drew a link between the Roma people and "stealing and illegality," while on Tuesday he attacked the "bleeding heart" attitude of the ECHR.

The Roma people, also known as Gypsies or Travellers, are an ethnic minority in Europe that often face prejudice and social exclusion. Amid calls on its 28 member states to better integrate the bloc's estimated 6 million Roma, national integration policies seem to be falling short.

A report released in 2017 from the European Union Agency for Fundamental Rights (FRA) showed that EU member states failed in their efforts to integrate the minority group, as 80 percent of Europe's Roma are at risk of poverty. About 80 percent of almost 34,000 Roma, or Gypsies, surveyed in nine EU nations over six months ending in April, live below the poverty level. Every third Roma child goes to bed hungry at least once a month, says the report, while 50 percent between the ages of 6 and 24 do not attend school.

The European Union has put an emphasis on improving Roma lives after centuries of discrimination, climaxing in the Holocaust that led to the deaths of about half a million Roma, and the report warned that continuing "widespread deprivation... destroys Roma lives" in the countries where most of the EU's estimated 6 million Roma live: Bulgaria, the Czech Republic, Greece, Spain, Croatia, Hungary, Portugal, Romania and Slovakia.