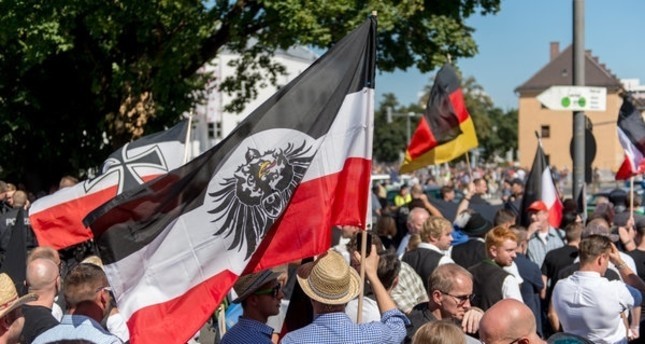 A Turkish man living in Germany became a victim of racism after being verbally attacked by a neighbor, according to a video on social media.

The video shows a visibly angry German man named Jürgen, hurling insults at a Turkish home owner near his own property.

In the video, Jürgen keeps insulting and harassing his neighbor of Turkish origin but the man never strikes back, instead just calmly reminds his attacker that Germany is his country.

"You are an a--h---, you are a pig" Jürgen shouts as he threatens his victim: "I'll crush you! I told you I would send you to prison."

After verbally harassing him for about two minutes, Jürgen tells the Turkish man to go back to Turkey, and leaves. "This place is s--- to you, this is not your country. Your country is Erdoğan's Turkey," he says.

The incident is the latest in a string of racist attacks following the Mesut Özil scandal, in which the world-class football star announced his departure from the German national team after being targeted by racist and discriminatory attacks for having a photograph taken with President Recep Tayyip Erdoğan.

The 3 million Turks in Germany, largely descended from the country's "guest workers" who arrived to aid the post-World War II development boom, often complain of the racist attacks and the lack of follow-up in police investigations for such incidents.

Dozens of xenophobic attacks occurred between 1990 and 1996 amid growing resentment against foreigners in the country after the unification of East and West Germany in 1990 and claimed the lives of at least 18 immigrants and asylum seekers and injured dozens more. The attacks against Turks started with the killing of 19-year-old student Mete Ekşi by three Nazi German brothers in 1991 in Kreuzberg. The killing of Ekşi was followed by other attacks, such as the one that killed Mustafa Demiral, 56, in 1993 in Mülheim. Though they are mostly nonlethal, arson attacks were one of the main methods of the attackers since they occasionally claim lives, like the Solingen attacks and another arson attack in 1992 in the town of Mölln that killed three Turks.

All these attacks have caused outrage in both Germany and Turkey and inspired many demonstrations that gathered thousands of people together of both Turkish and German descent.

Yet, these demonstrations were not enough to stop the attacks since the killing of Turks continued in into the 2000s, as well. Many Turkish shopkeepers were attacked in several German cities in the early 2000s, incidences that later became known as the "Döner murders," causing the deaths of eight Turks and one Greek. In 2011, it was revealed that the neo-Nazi group, the National Socialist Underground (NSU), was responsible for the attacks as well as for the Cologne bombing in 2004 that injured 22 Turks.

Since then, attacks have been sporadic but frequent enough to raise concerns among the Turkish community as far-right groups have gone mainstream in the past few years, accompanied by anti-Turkish discourse among far-right politicians. These attacks have led to tense relations between Turkey and Germany, as numerous Turkish citizens living in Germany and mosques became the targets of far-right attacks. Last year, Ankara warned citizens to be cautious and act responsibly when confronted with cases of xenophobia, incidents of racism and verbal attacks.