Danes protest as 'burqa ban' comes into effect in Denmark 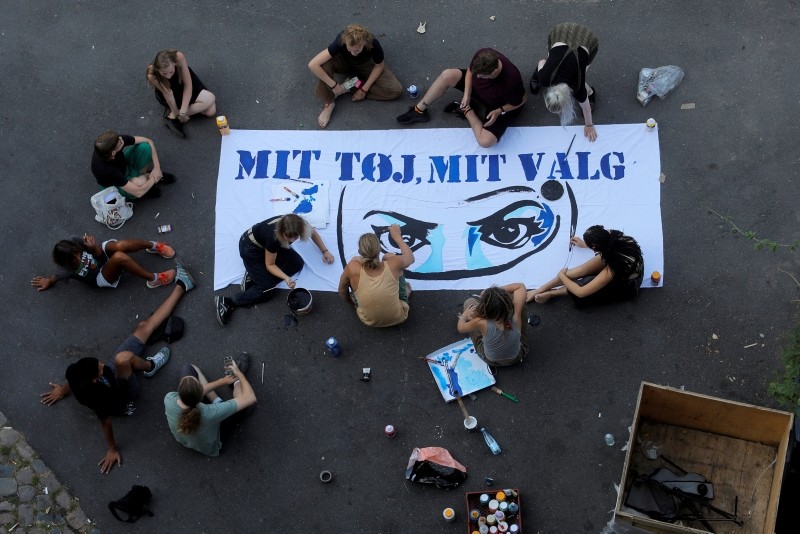 People gather at a workshop to make a banner that translates to ,My Clothes my choice, in preparation for the protest against the Danish u2018burqa banu2019. (Reuters Photo)
by Compiled from Wire Services Aug 01, 2018 12:00 am

Supporters and opponents of a ban on garments covering the face, including Islamic veils such as the niqab or burqa, clashed verbally Wednesday as the law takes effect.

Marcus Knuth of the ruling liberal party Venstre, says the dress worn by some conservative Muslim women is "strongly oppressive."

Sasha Andersen of the "Party Rebels" activist group, is planning a demonstration later in the day against what they called Wednesday a "discriminatory" measure against a minority group. Groups that back the ban also plan to rally.

Sabina, 21, who is studying to be a teacher, has joined forces with other Muslim women who wear the veil to form Kvinder I Dialog (Women In Dialogue) to protest and raise awareness about why women should be allowed to express their identity in that way

"I won't take my niqab off. If I must take it off I want to do it because it is a reflection of my own choice," she said.

Like the other women interviewed for this article, Sabina did not wish to have her surname published for fear of harassment.

The niqab wearers who plan to protest on Wednesday will be joined by non niqab wearing Muslim women and also non-Muslim Danes, most of whom plan to wear face coverings at the rally.

"Everybody wants to define what Danish values are," said Meryem, 20, who was born in Denmark to Turkish parents and has been wearing the niqab since before meeting her husband, who supports her right to wear it but feels life could be easier without.

"I believe that you have to integrate yourself in society, that you should get an education and so forth. But I don't think wearing a niqab means you can't engage yourself in Danish values," Meryem, who has a place to study molecular medicine at Aarhus University, said.

Like Sabina, Meryem plans to defy the law, keep her niqab on and protest against the ban.

Under the law, police will be able to instruct women to remove their veils or order them to leave public areas. Justice Minister Soren Pape Poulsen said officers would fine them and tell them to go home.

"I feel this law legitimizes acts of hatred but, on the other hand, I feel people have become more aware of what is going on. I get more smiles on the street and people are asking me more questions," said Ayah, 37.

Mathias Vidas Olsen, who makes reproductions of Viking age jewelry, is supporting the campaign by making special bracelets and giving the proceeds to Kvinder I Dialog.

"I'm not for or against the niqab," the 29-year-old Copenhagen man said.

"I'm for the right of the people to wear whatever they want whether they be a Muslim or a punk.

"I see this as the government reaching in to places they don't belong and as a cheap hit on an already stigmatized group to score cheap political points."

Danish lawmakers approved the law in May, which was presented by the center-right governing coalition that is known for tightening asylum and immigration rules in recent years. In 2016, Denmark also adopted a law requiring newly arrived asylum-seekers to hand over valuables such jewelry and gold to help pay for their stays in the country.

Other European countries have similar bans, claiming they are not aimed at any religion in particular, and don't ban headscarves, turbans or the traditional Jewish skull cap.

Popularly known as the "Burqa Ban," it is mostly seen as being directed at the niqab and burqa. Few Muslim women in Denmark wear such full-face veils.

The law allows people to cover their face when there is a "recognizable purpose" like cold weather or complying with other legal requirements, such as using motorcycle helmets required under Danish traffic rules.

Anyone forcing a person to wear garments covering the face by using force or threats can be fined or face up to two years in prison.