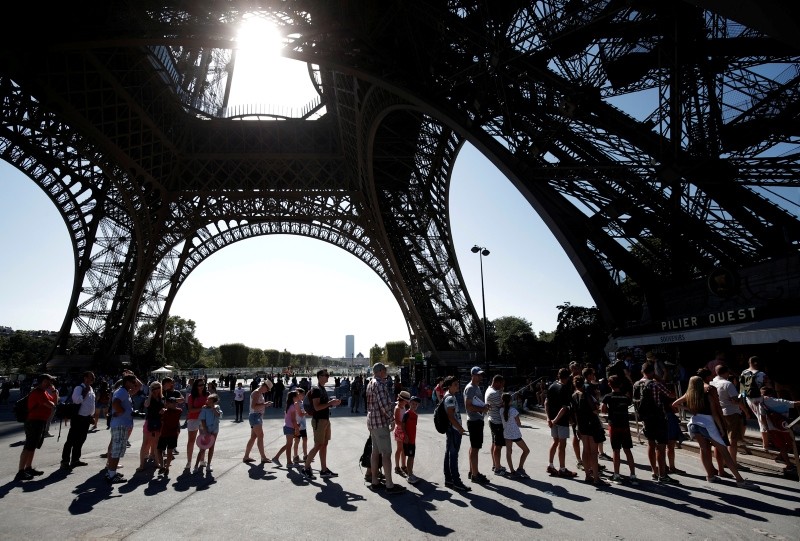 People stand in line at an information booth following the closure of the Eiffel Tower as part of a strike by employees over lengthening queues during the peak summer tourist season in Paris, France, August 2, 2018. (Reuters Photo)
by Compiled from Wire Services Aug 02, 2018 12:00 am

The Eiffel Tower in Paris failed to open on Thursday morning as a strike launched the previous afternoon went into a second day at the peak of the tourist season.

Staff are angry about a new queueing system for the tower's lifts that is meant to facilitate purchasers of online tickets but, they say, has led to lengthy waits and frustration for visitors.

Workers say the changes have resulted in lopsided queues that can extend to three hours for those waiting to pay for tickets, and up to an hour for internet customers who are supposed to have reserved time slots.

The tower's management, which is trying to push more visitors to buy tickets online, says it has offered to try out an alternative system suggested by trade unions.

Local mayor Rachida Dati has also complained about growing queues for the security checks around the site.

The queues themselves were a security issue as well as a nuisance for local residents, Dati said in letters to management and police published on Twitter on Tuesday.

"We may or may not come again, because we spent so much money," a tourist who gave her name only as Hema told AFP on Wednesday.

"It's not nice, for whatever reason they have the strike for, it's an injustice to visitors," said Hema, who was visiting with her husband and two teenaged children.

Negotiations dragged on well into Wednesday night and resumed early Thursday, when workers were supposed to vote on a proposal offered by the site's operator SETE, which is majority owned by the city of Paris.

"The SETE is well aware of the disappointment for visitors because of the monument's closure, and its negative impact on the image of both the city and country," the company said in a statement Wednesday.

The tower's 300-strong staff has staged strikes repeatedly in recent years over issues including pickpocketing and maintenance work.

With 6.2 million visitors last year, the Eiffel tower was the second-most popular monument in Paris, after the Louvre museum.

Work is currently under way to build new glass and metal fences around the tower.

They will replace temporary security barriers put in place in response to the deadly terrorist attacks that hit Paris in 2015.