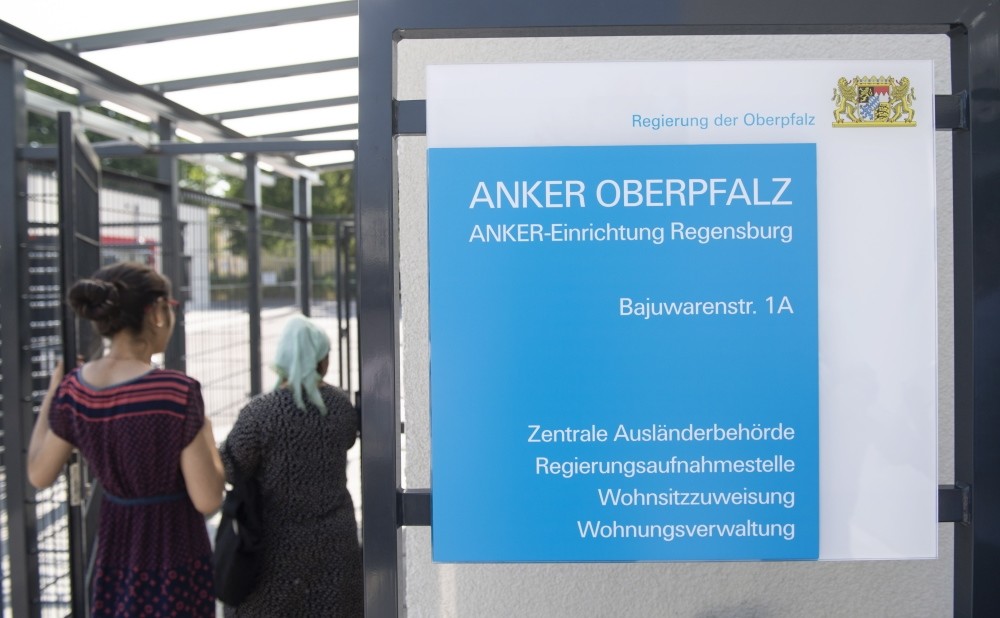 A board which reads u2018Anker Oberpfalz' (Anchor centers) in front of the reception and deportation center for refugees in Regensburg, Bavaria, August 1.
by Compiled from Wire Services Aug 02, 2018 12:00 am

Defying criticism from right groups over humanitarian concerns, the German state of Bavaria opened the first centers to process migrants at the Austrian border

Germany's southern state of Bavaria launched the country's first controversial "Anker" centers yesterday, following a feud over asylum policy that nearly brought down the government. The facilities are part of Interior Minister Horst Seehofer's plan to reduce the number of asylum seekers in Germany by speeding up the asylum process and fast-tracking the deportations of unsuccessful applicants.

The plan suggests that the German word "Anker" can be read as a portmanteau of the terms "Ankunft, Entscheidung, Rueckfuehrung" (arrival, decision, return). Seehofer first floated the idea of anchor centers, sites in Germany where asylum seekers will be kept until their right to stay is determined, in April. The aim is for the entire asylum process to be completed in these centers, with all the relevant government authorities and legal facilities present. Few of Germany's 16 states have thus far shown enthusiasm for the idea. But Bavaria, the home state of Seehofer's right-wing conservative Christian Social Union (CSU), went ahead with the plan despite criticism.

Existing migrant arrival centers in Bavaria have been adapted to serve as anchor centers, housing representatives from a variety of government agencies involved in asylum application decisions. Each of the seven centers is designed to accommodate around 1,000 to 1,500 people.

Critics have hit out at the centers, calling them deportation camps and warning of the ghettoization of migrant communities. "Anchor [Anker] centers hinder a child from growing up in an appropriate way. They cause tensions and aggressions," Susanna Krueger from Save the Children said, as reported by dpa.

Various NGOs have voiced concern about holding hundreds of refugees in such highly-strung environments, citing past incidents where fights broke out over small issues such as cleaning out fridges or distributing pocket money, requiring major responses from police.

The plans for the anchor centers were set out in March when Chancellor Angela Merkel's Christian Democratic Union (CDU) agreed to the terms of its coalition with the CSU and the center-left Social Democrats (SPD). But disagreement over asylum policy caused a major political crisis in June that pitted Seehofer against Merkel and threatened to topple both the government and the decades-old alliance between their two parties. Seehofer wanted to begin turning asylum seekers away at the German border, a move Merkel found unacceptable.

The weeks-long row had threatened to topple her "grand coalition" government after just 100 days in power. German Interior Minister and CSU leader Horst Seehofer's push to start turning away migrants put him on a collision course with the chancellor, who insisted on avoiding unilateral decisions in favor of solutions in accordance with other EU member states.

Merkel made an 11th-hour deal with Seehofer to hold asylum seekers arriving at the country's southern border with Austria in transit centers while their status is checked. The deal pulled the coalition back from the brink of collapse after threats by Seehofer to resign and speculation about the end of the long-standing CDU-CSU conservative alliance. The third partner in Merkel's coalition, the Social Democrats (SPD), voiced humanitarian concerns over the creation of closed centers for migrants, further fueling speculation about the government's collapse.