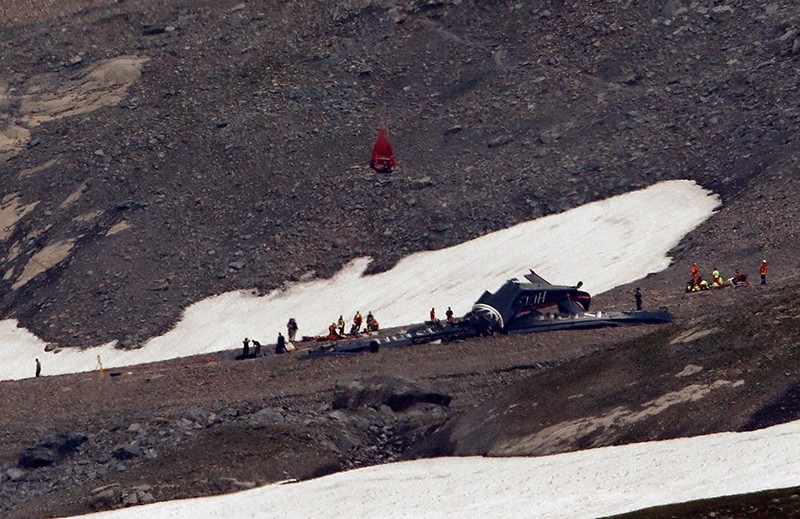 An old-time propeller plane operated by a company that offers panoramic flights has crashed in the Swiss Alps on Saturday, killing all 20 onboard.

Swiss police said all passengers aboard the old-time propeller plane were killed when the aircraft crashed into a mountainside in southeast Switzerland.

Officials said 11 men and nine women were killed, most from Switzerland but also a couple and their son from Austria.

Police confirmed that the crashed plane was JU-Air's JU-52 HB-HOT aircraft, which aviation websites said was flying from Locarno near Switzerland's southern border to the airline's base in Duebendorf, Zurich.

"The JU-Air team is deeply saddened and is thinking of the passengers, the crew and families and friends of the victims," JU-Air said on its website on Sunday.

The airline was established in 1982 and offers sightseeing, charter and adventure flights with its three mid-century Junkers Ju-52 aircraft decommissioned by the Swiss Air Force and known affectionately in German as "Auntie Ju" planes.

It said it was suspending flights until further notice.

The wreckage of the plane was in a basin at 2,450 metres (8,000 feet) above sea level surrounded on three sides by peaks, a Reuters witness said. Rescuers and helicopters were at the scene.

The cause of the crash, which occurred hours after a family of four was killed when their small plane went down further west in the Alps, is under investigation.

The airspace above the crash site was closed by the Federal Office for Civil Aviation and access to popular hiking trails in the surrounding area was blocked.