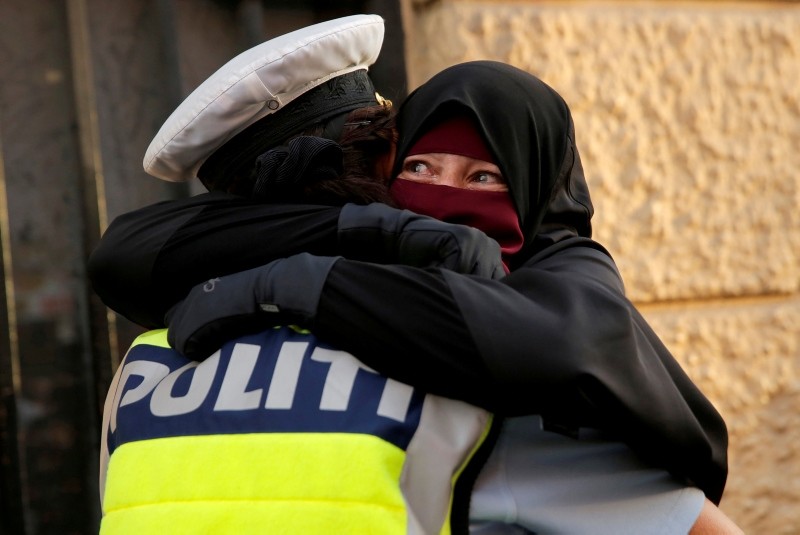 Ayah, 37, a wearer of the niqab weeps as she is embraced by a police officer during a demonstration against the Danish face veil ban in Copenhagen, Denmark, August 1, 2018. (Reuters Photo)
by Associated Press
Aug 04, 2018 12:00 am

A 28-year-old woman wearing a face veil has become the first person in Denmark to be fined for violating a new law banning such garments in public places.

Danish news agency Ritzau reported that police were called Friday to a shopping center in Horsholm, a city of 46,000 close to Copenhagen, to confront a woman wearing a niqab garment covering her face.

The woman was fined 1,000 Danish kroner ($156) and was asked to either remove the veil or leave the premises. She opted to leave.

Since Aug.1, the country's much-debated "Burqa Ban" has prohibited full-body burqas, as well the niqab — Muslim dress which only shows the eyes. Both are rare in Denmark.

The government says the law is not aimed at any religion and does not ban headscarves, turbans or the traditional Jewish skull cap.

The Danish law allows people to cover their face when there is a "recognizable purpose" like cold weather or complying with other legal requirements, such as using motorcycle helmets. Anyone forcing a person to wear garments covering the face by using force or threats can be fined or face up to two years in prison.