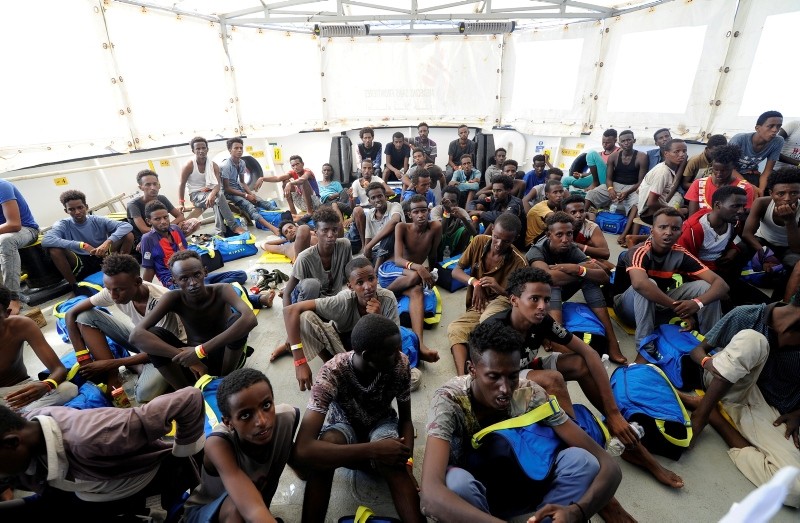 Migrants rest after being rescued by SOS Mediterranee organisation and Doctors Without Borders during a search and rescue (SAR) operation with the MV Aquarius rescue ship in the Mediterranean Sea, August 10, 2018. (REUTERS Photo)
by Compiled from Wire Services Aug 13, 2018 12:00 am

Abandoning 141 migrants to their fate at sea, Italy’s far-right government called on Britain to take them in aboard a rescue ship that sails under the flag of the British territory of Gibraltar

Italy said Monday it would not offer safe harbor to the 141 people rescued by the humanitarian ship Aquarius off the coast of Libya last week, urging Britain or other European Union allies to take them in.

The Aquarius, run by Franco-German charity SOS Mediterranée and Doctors without Borders (MSF), picked up the migrants in two separate operations and is now in international waters between Italy and Malta. They also said that rescued migrants "told our teams that they encountered five different ships which did not offer them assistance before they were rescued by Aquarius." According to the nongovernmental organizations (NGOs), 70 percent of the migrants hail from Somalia and Eritrea and many are "extremely weak and malnourished" and "report that they were held in inhumane conditions in Libya."

The Aquarius spent nine days at sea in June after Rome's new populist government took office and shut its ports to all humanitarian boats, calling them a "taxi service" and accusing them of helping people smugglers — charges the charities deny.

"It can go where it wants, not in Italy!" far-right Interior Minister Matteo Salvini said of the Aquarius on Twitter, mentioning France, Germany, Britain or Malta as destinations. "Stop human traffickers and their accomplices, #closedports and #openhearts," he wrote, as reported by Reuters.

Transport Minister Danilo Toninelli, who oversees ports and the coast guard, said the ship's flag country, which is Gibraltar, should take responsibility. "At this point, the United Kingdom should assume its responsibility to safeguard the castaways," Toninelli said on Twitter.

Since it took office on June 1, Italy's populist government has vowed that no more private aid ships will bring migrants to Italian shores. Although arrivals in Italy of rescued migrants smuggled from Libya have sharply dropped off this year compared to previous years, some 600,000 reached Italian ports in the last few years. Italy demands fellow European Union countries take the asylum-seekers from Africa, Asia and the Middle East. The tiny EU island nation of Malta says it can't handle large numbers of migrants.

While fewer people were managing to reach Europe via the so-called "central route" to Italy, more were drowning at sea. The U.N.'s International Organization for Migration (IOM) reported a record monthly total of 564 deaths in June and a further 157 in July. Across the whole Mediterranean, 1,514 migrants lost their lives while trying to cross into Europe, the U.N. refugee agency reported. In a statement, the IOM said the arrivals are mainly from Tunisia, Eritrea, Ivory Coast, Mali, Guinea, Pakistan, Iraq and Algeria.