At least 30 killed as motorway bridge collapses in Italy's Genoa 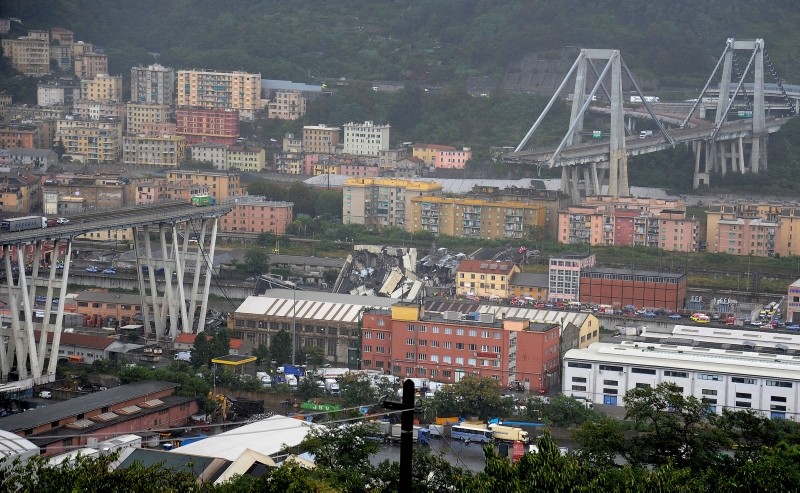 Thirty people have been confirmed dead after the collapse of a motorway bridge in the northwestern Italian city of Genoa, deputy transport minister said.

"Around 30 people are dead and many others are seriously injured," Salvini told reporters in Sicily. A firefighter told RAI state TV that some 20 vehicles were involved in the collapse.

Italian news agency ANSA says one person has been extracted alive from the rubble and is being transported by helicopter to a hospital.

Interior Minister Matteo Salvini said some 200 firefighters are responding to the accident. On Twitter he says "we are following minute by minute the situation of the bridge collapse in Genoa."

Italian police said on Twitter that the incident, which occurred around 11:30 a.m. (0930 GMT), took place amid a "severe downpour." ANSA said that authorities suspected that a structural weakness caused the collapse on Tuesday.

A witness told Sky Italia television he saw "eight or nine" vehicles on the bridge when it collapsed in what he said was an "apocalyptic scene."

Transport Minister Danilo Toninelli said in a tweet that he was "following with great apprehension what seems like an immense tragedy."

According to the ANSA news agency, the concrete bridge, part of the A10 toll motorway, collapsed from a height of about 100 meters.

Italian television showed images of the collapsed bridge. Video captured the sound of a man screaming: "Oh god, oh, god." Other images showed a green truck that had stopped just meters (yards) short of the gaping hole in the bridge.

UPDATE — 11 confirmed dead, 5 in critical condition as some 20 vehicles believed to have been crushed in the collapse of a motorway bridge in Italy's Genoahttps://t.co/k8lEarCTDK pic.twitter.com/0xP7oQGIin

A fire service spokesperson told AFP that the bridge had mostly fallen on rail tracks 100 metres (yards) below and that "cars and trucks" had fallen with the rubble.

"Firefighters are working together and teams of rescuers and police sniffer dogs have been mobilized," emergency services said on Twitter.

One factory, immediately next to one of the viaducts support columns, was virtually empty on Tuesday due to a national holiday, and seems to have sustained minimal damage.

Shares in Italian company Atlantia, which runs much of Italy's motorway network including the collapsed stretch of the A10, plunged on the Milan stock exchange after the news.

They were down 9.7 percent at 22.48 euros in mid-afternoon, having earlier been temporarily suspended when their drop exceeded 10 percent.

French President Emmanuel Macron said on Twitter that France was "by Italy's side in this tragedy and is ready to offer all necessary support".

At a joint press conference with Iraqi Prime Minister Haider al-Abadi in Ankara, President Recep Tayyip Erdoğan offered his condolences to the victims of the collapse.

Meanwhile, Presidential aide Ibrahim Kalın offered his condolences through Twitter. " Our condolences for those who lost their lives in the bridge accident in Genoa, Italy. We share your pain and stand with you," he wrote.

Genoa is located between the sea and the mountains of northwestern Italy. Its rugged terrain means that motorways that run through the city and the surrounding area are characterized by long viaducts and tunnels.

The Morandi Bridge was inaugurated in 1967. It is 90 meters (295 feet) high, just over a kilometer (about three-quarters of a mile) long, with the longest section between supports measuring 200 meters (650 feet). The bridge is a main thoroughfare connecting the A10 highway that goes toward France and the A7 highway that continues north towards Milan.

The disaster came on the eve of a major Italian summer holiday on Wednesday called Ferragosto, which means traffic was heavier than usual as Italians traveled to beaches or mountains.

Tuesday's incident is the latest in a string of bridge collapses in Italy, a country prone to damage from seismic activity but where infrastructure generally is showing the effects of economic stagnation.

In March last year a couple were killed when a motorway overpass collapsed on their car near Ancona on the country's Adriatic coast.

A pensioner died in October 2016 when his car was crushed by a collapsing bridge over the SS36 dual carriageway between Milan and Lecco.

That incident was blamed on bureaucratic bungling which led to a fatal delay in the bridge being closed after it was reported to be showing significant cracks.

The collapse of the bridge comes eight days after another major accident on an Italian highway, one near the northern city of Bologna. In that case, a tanker truck carrying a highly flammable gas exploded after rear-ending a stopped truck on the road and getting hit from behind itself. The accident killed one person, injured dozens and blew apart a section of a raised eight-lane highway.