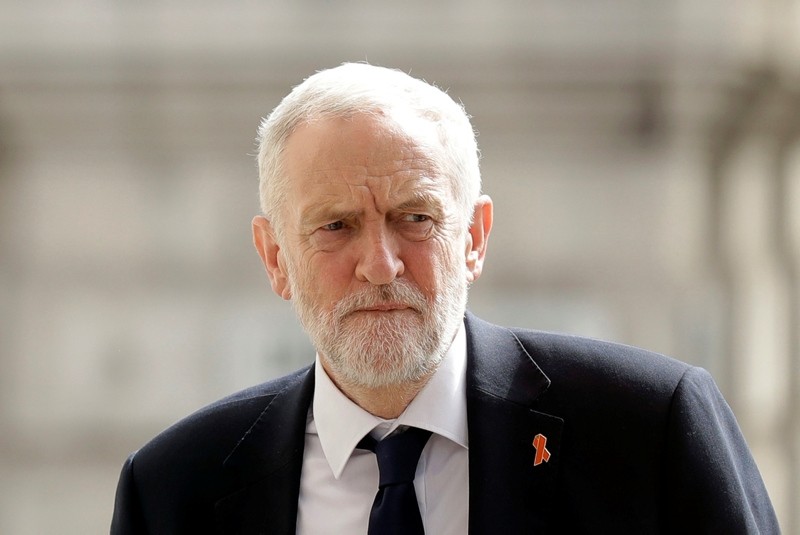 Corbyn made the remarks on Twitter in reply to Israeli Prime Minister Benjamin Netanyahu, who joined the criticism against Corbyn over his alleged participation in a wreath-laying ceremony in Tunisia four years ago to honor the perpetrators of the 1972 Munich Olympics massacre.

"The nation-state law sponsored by @Netanyahu's government discriminates against Israel's Palestinian minority. I stand with the tens of thousands of Arab and Jewish citizens of Israel demonstrating for equal rights at the weekend in Tel Aviv," Corbyn said.

British tabloid the Daily Mail published photos of Corbyn at the ceremony holding a wreath while standing near the graves of members of the Black September group. The event took place in 2014, before he was elected Labour leader.

The Black September group is believed to be behind a deadly terrorist attack that targeted Israeli athletes during the 1972 Olympics in Germany which left 11 dead.

"The laying of a wreath by Jeremy Corbyn on the graves of the terrorists who perpetrated the Munich massacre and his comparison of Israel to the Nazis deserves unequivocal condemnation from everyone," Netanyahu said on Twitter.

However, Corbyn told the British press that although he was present at the ceremony, he was not involved.

The Daily Mail cited sources close to Corbyn as saying that he was at a service to commemorate the 47 Palestinians who were killed in an Israeli airstrike in 1985 on a Tunisian base of the Palestinian Liberation Organization (PLO). The monument to the airstrike victims is only yards away from a plaque that lies beside the graves of the Black September members.

An Israeli airstrike killed 47 people and wounded 65 others on Oct. 1, 1985, according to official sources in Tunisia.

Corbyn said "wreaths were laid at the graves of those who died" in the airstrike and "on the graves of others killed in Paris in 1992", referring to PLO members killed by Mossad agents.

"I was there because I wanted to see a fitting memorial to everyone who has died in every terrorist incident everywhere.

"Israeli PM @Netanyahu's claims about my actions and words are false," Corbyn also said on Twitter in his response to Netanyahu.

Corbyn was referring in his tweet to thousands of people, mostly Israeli-Arabs, who demonstrated in Tel Aviv last Saturday against the controversial nation-state law which was passed by Israel's parliament, the Knesset, last month.

The law defines Israel as a Jewish state with a "united Jerusalem" as its capital. It also promotes Hebrew as the only official language, stripping Arabic as an official language while recognizing its "special status".

The legislation risks further alienating the Arab minority, who argue that they already face discrimination from Israeli Jews and the government and feel as though they are second-class citizens.

Palestinians who have Israeli citizenship make up 21 percent of the population and are known as Israeli Arabs and have members in the Knesset.

The accusations directed at the Labour party are not new, but they grew after Labour's success in last year's snap election with the party winning 262 seats in the House of Commons and attracting attention as an alternative to the current Conservative government.

In a 2016 renewed leadership contest following resignations from his shadow cabinet, Corbyn secured his position as leader with 61.8 percent of the votes from party members.

A joint editorial published last month by The Jewish Chronicle, Jewish News and Jewish Telegraph that appeared on the front pages of all three papers under the headline "United We Stand" described the Labour Party as the "natural home" for Britain's Jewish community but claimed the party had "seen its values and integrity eroded by Corbynite contempt for Jews and Israel".

"The stain and shame of antisemitism has coursed through Her Majesty's Opposition since Jeremy Corbyn became leader in 2015," the editorial charged.

Accusing the party of becoming "institutionally racist," the editorial underlined "the strong concerns raised in the Jewish community".

The latest row over anti-Semitism accusations by the UK's Israeli lobby arose over Labour's refusal to accept the full text of the working definition of anti-Semitism produced by the International Holocaust Remembrance Alliance (IHRA).

The party expressed concern over creating a code of conduct that could be "used to deny Palestinians, including Palestinian citizens of Israel and their supporters, their rights and freedoms to describe the discrimination and injustices they face in the language they deem appropriate".

Corbyn signaled that three of the four IHRA examples of anti-Semitism would be added to the party's code of conduct, namely "comparing contemporary Israeli policies to those of Nazis," "suggesting Jewish people are more loyal to Israel than their home country" and "holding Israel to different standards to other democratic countries".

But Corbyn also signaled that he would continue to reject the fourth example: "Denying Jewish people have a right to self-determination-for example by claiming that the existence of a state of Israel is a 'racist endeavor'."