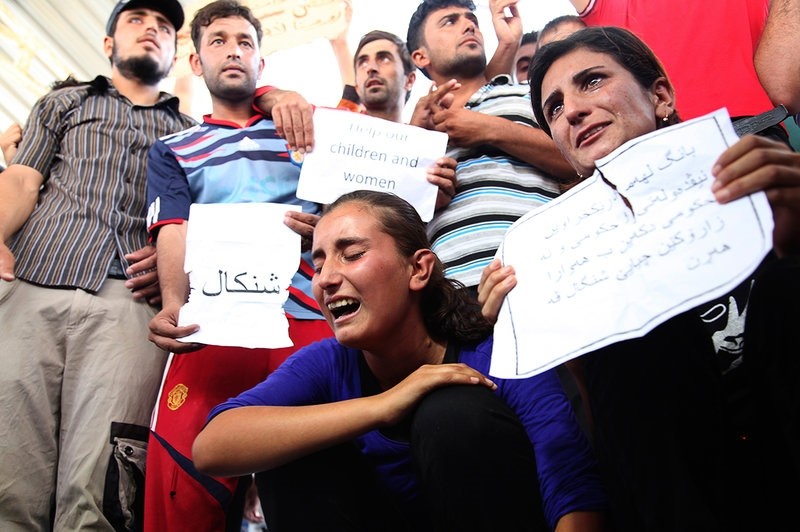 Displaced demonstrators from the Yezidi minority demonstrate outside the United Nations offices in Irbil, Iraq, on Aug. 4, 2014 in support of those held captive by Daesh. (Reuters Photo)
by Daily Sabah Aug 16, 2018 12:00 am

A young Yazidi woman from northern Iraq's Sinjar previously enslaved by Daesh terrorists has fled Germany after being confronted by her former captor and abuser who was reportedly also registered as an asylum seeker in the southern city of Stuttgart.

According to British daily The Times, Ashwaq Ta'lo was 15 years old when she was sold for $100 to a Syrian Daesh member named Abu Humam by the terrorist network in Mosul in August 2014.

The woman was reportedly raped and abused every day during two months of captivity, before managing to escape and apply for asylum in Germany.

After reuniting with some of her family members in Germany, Ta'lo said that she first saw her captor in 2016 but thought it "could not be possible."

However in February 2018, Ta'Lo again had a frightening encounter with the Daesh member, during which she was openly approached and threatened.

"I froze when I looked at his face carefully. It was Abu Humam, with the same scary beard and ugly face," Bas News quoted her as saying.

Ta'Lo said that her abuser claimed he knew she was in Germany and where she lived.

Shocked by the incident, the woman immediately sought help from the immigration office and the police.

Although police officers were able to identify the man from CCTV footage, they took no action, saying they couldn't do anything because he held refugee status.

As the woman did not feel safe anymore in Germany, she reportedly decided to go back to Iraq, where she now lives with her father.

The Times also said that numerous young girls, including Ta'Lo's sister, are still in the hands of Daesh terrorists. The Yazidi woman's five brothers are also still missing.