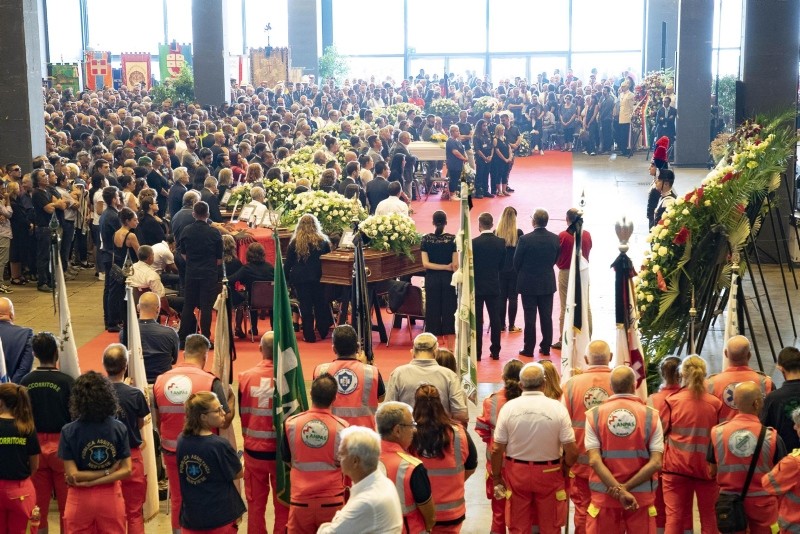 A handout photo made available by the Quirinal Press Office shows Italian President Sergio Mattarella arriving at the state funeral for the victims of the Morandi Bridge collapse, in Genoa, Italy, Aug. 18, 2018. (EPA Photo)
by Compiled from Wire Services Aug 18, 2018 12:00 am

Grief gripped the Italian city of Genoa Saturday as thousands of mourners attended a state funeral to commemorate the victims of a bridge disaster that has sparked anger, while rescuers pulled more bodies from the wreckage.

Large crowds packed inside an exhibition hall turned into a makeshift chapel where coffins adorned with flowers and photographs were lined up.

There was long applause as a priest read out the names of the 38 official dead and also paid respect to the latest victims discovered inside a car under debris early Saturday. Local media reported that the bodies were those of a family of three, including a nine-year-old girl.

"The Morandi Bridge collapsed has pierced the heart of Genoa. The pain is deep," Archbishop Angelo Bagnasco said during the mass.

Italian President Sergio Mattarella and Prime Minister Giuseppe Conte presided over the service, which coincided with a national day of mourning.

"I lost a friend but I came for all the victims," Genoa resident Nunzio Angone told AFP.

The populist government has blamed the operator of the viaduct for the collapse and threatened to strip the firm of its contracts.

Among the coffins was a small white one for the youngest victim, an eight-year-old boy who was killed alongside his parents as they prepared to catch a ferry to the holiday island of Sardinia.

Another two coffins were draped in the Albanian flag featuring a black eagle against a red background.

An imam has blessed the coffins of the two Muslim faithful at the end of the Catholic Mass. Families of the two Albanian victims decided to have their loved ones' coffins join those of 17 Catholic dead at the state funeral celebrated Saturday by Genoa's archbishop. The imam drew applause when he prayed that God protect Italy and all Italians.

The Chilean flag was draped on two others. Another was covered with soccer memorabilia.

"I don't know those who have died in the bridge collapse but I wanted pay my respects regardless. This shouldn't have happened," Genoa resident Claudio Castellaro, 73, told AFP.

"These things should not happen but unfortunately they still do. Now they're looking for someone to blame but dead people cannot come back," said Giuseppe Rondinelli, a friend of one of the victims, who was among the mourners.

'Farce of a funeral'

Members of the fire brigade, rescue teams and the police force were welcomed with applause as they entered the exhibition center.

There was also loud clapping for co-deputy premiers Matteo Salvini and Luigi di Maio, two key figures in Italy's new populist government who have led angry tirades against Autostrade per L'Italia, the managing company of the highway.

But more than half of the families of the victims refused to take part, some preferring a more intimate funeral, while others announced a boycott.

"It is the state who has provoked this; let them not show their faces, the parade of politicians is shameful," the press cited the mother of one of four young Italians from Naples who died.

Roberto, father of another of the dead from Naples used social media to vent his anger: "My son will not become a number in the catalogue of deaths caused by Italian failures."

"We do not want a farce of a funeral but a ceremony at home."

Italian RAI state radio said what was believed to be the body of the last person missing in Tuesday's collapse of the Morandi Bridge was that of a 30-year-old man.

A few hours earlier, the bodies of an Italian couple and their 9-year-old daughter were found in their smashed car under a big block of concrete, part of tons of material that crashed 45 meters (150 feet) into a dry riverbed and nearby areas when the heavily trafficked major highway span gave way. Relatives had said the family, from northern Italy, had been traveling to catch a ferry for the island of Elba while on vacation.

RAI said authorities now believe there are no more missing after an elderly German man called officials to say he wasn't involved in the disaster.

A Genoa court will try to establish the exactly why the 51 year-old bridge collapsed, but experts said problems with concrete-encased cable stays were a possible cause.

The disaster has dragged toll-road operator Autostrade per l'Italia (ASPI), controlled by infrastructure group Atlantia, into a political storm. The firm manages the section of the A10 motorway linking Genoa to the French border.

Local media reports said senior staff of Autostrade had planned to attend to the funeral. The company was expected to hold a press conference on Saturday afternoon.

The government has accused Autostrade of failing to invest in sufficient maintenance and said it would seek to revoke its lucrative contracts.

The Transport Ministry has given Autostrade 15 days to show it has met all its contractual obligations, failing which Rome could consider it in breach of the terms of its concessions.

Transport Minister Danilo Toninelli said he would deploy all necessary resources to avoid further disasters and said he was preparing contingencies in case the concessions were revoked.

Salvini, who is also interior minister, demanded that the company offer up to 500 million euros ($570 million) to help families and local government deal with the aftermath of the disaster.

The Morandi viaduct dates from the 1960s and has been riddled with structural problems for decades, leading to expensive maintenance and severe criticism from engineering experts.

Its collapse prompted fears over ageing infrastructure across the world.

Italy has announced a year-long state of emergency in the region.

Autostrade, which operates and maintains some 3,000 kilometers - nearly half - of Italy's motorways, estimates it will take five months to rebuild the bridge.

It denies scrimping on motorway maintenance, saying it has invested over one billion euros a year in "safety, maintenance and strengthening of the network" since 2012.

Atlantia, the holding company of Autostrade which is 30 percent owned by iconic fashion brand Benetton, has warned that the government would have to refund the value of the contract, which runs until at least 2038."

Government officials were set to join a police meeting in Genoa to discuss contingency measures for the city, which has been split in two.