Ukraine marks 27 years of independence with biggest ever military parade 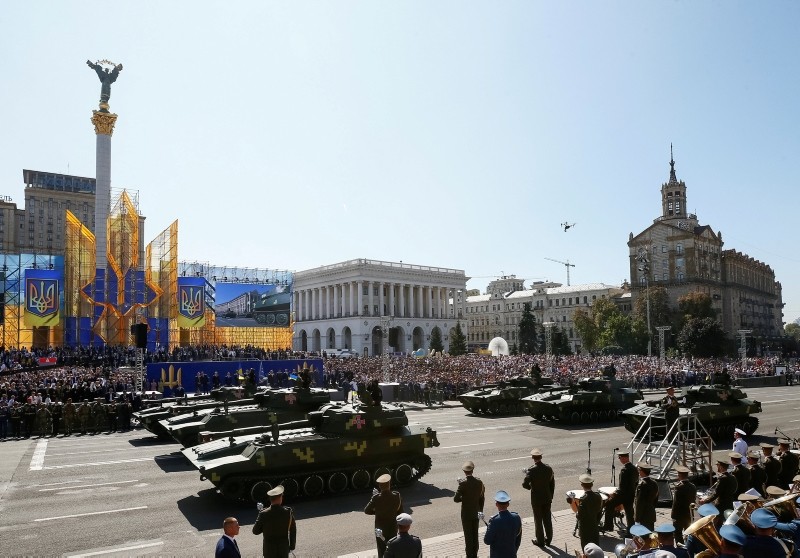 Ukraine marked 27 years of independence Friday with its biggest ever military parade in central Kiev, as war continues against Russian-backed separatists in the country's east.

Around 4,500 servicemen, including dozens of representatives of foreign allies such as the United States and Great Britain, saluted Ukrainian President Petro Poroshenko during the demonstration. U.S. President Trump's National Security Advisor John Bolton was also present at the ceremony.

Poroshenko used the occasion to argue for the vital role Ukraine plays in defending the borders of Europe.

Without the territorial integrity of Ukraine, "all borders in Central and Eastern Europe will be uncertain", he said.

"Russia's war against Ukraine is part of the Kremlin's plan to ruin the EU and NATO," the president added.

"I want to stress that Europe needs us, because the EU would be an incomplete project without us."

Some 250 pieces of military hardware including multiple-launch rocket systems were shown to thousands of spectators, many of them waving Ukrainian blue and yellow flags.

As part of the military show, in which last year just 70 pieces of hardware were displayed, army helicopters and jets flew over Kiev's main street.

"Glory to Ukraine!" -- the controversial slogan of the pro-EU revolution that in 2014 ousted Moscow-backed leader Viktor Yanukovych -- was used for the first time as the official military greeting of the Ukrainian army.

"I thank every Ukrainian for the fact that we have stood firm, not just survived, but also built up strong muscles, became stronger," Poroshenko said in broadcast remarks.

American and Canadian soldiers also marched during the parade.

More than 10,000 people have been killed since the Moscow-backed insurgency broke out in eastern Donetsk and Lugansk regions in April 2014 following Russia's annexation of Crimea from Ukraine after a pro-Western revolution.

Ukraine and its Western allies accuse Russia of funneling troops and arms across the border.

Moscow has denied the allegations despite overwhelming evidence that it has been involved in the fighting and gives open political support to the rebels.

Following the parade, Bolton said that Ukraine had made progress in its efforts to join the North Atlantic Treaty Organisation (NATO), but that it still had more work to do. Russia strongly opposes NATO expansion towards its western borders. He said it was important to resolve the Ukraine crisis and that it would be dangerous to leave the situation as it is.

Bolton also said that the Ukraine government should consider looking for alternatives to natural gas supplies from Russia. He added Kiev should consider inviting U.S. companies to explore gas in Ukraine.