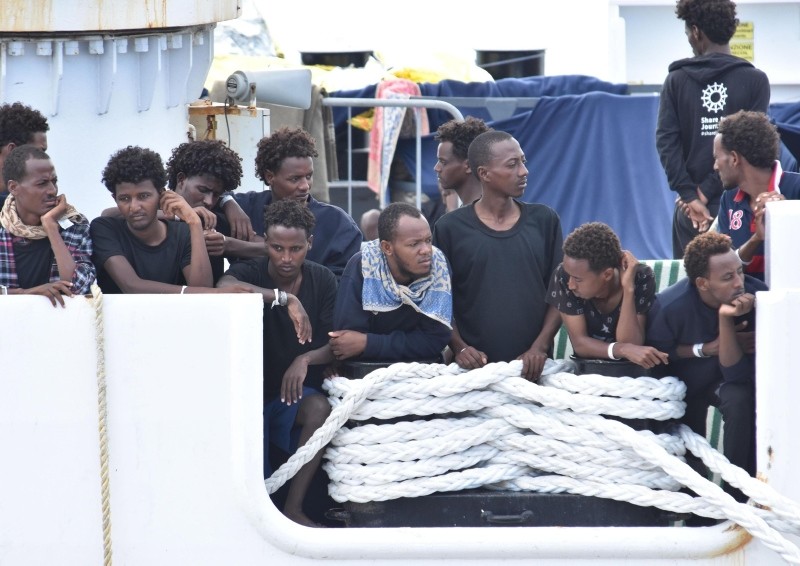 Concerns mounted Saturday about the medical and psychological health of 150 migrants who were spending their 10th day stuck aboard an Italian coast guard ship while the government insists that other European Union nations must take them.

The health minister requested an onboard visit by doctors to the Diciotti coast guard ship, which is docked in Catania, Sicily. After it was done, authorities decided that 16 migrants should be taken off the ship for medical reasons, two of them for suspected cases of tuberculosis and three for pneumonia, Red Cross officials said.

The standoff prompted an impassioned appeal by the U.N. refugee agency's chief, asking Italy to let them disembark and urging EU countries to take responsibility for the asylum-seekers, most of them young men fleeing harsh conditions in Eritrea.

U.N. High Commissioner for Refugees Filippo Grandi, speaking in Geneva, said it's time to end a "race to the bottom on who can take the least responsibility for people rescued at sea."

He urged European countries "to do the right thing and offer places of asylum for people rescued from the Mediterranean Sea in their time of need."

But Italian Interior Minister Matteo Salvini has been adamant that the migrants be kept on the ship until fellow EU nations pledge to take them.

Prosecutors could decide to investigate suspected kidnapping, after the government's rights office for detained persons concluded this week that the migrants were being unjustly held by the government

Salvini, who leads the anti-migrant League party, has said he's ready to defend his reasons for ordering the migrants kept aboard.

Prosecutors would have to seek the government's permission to question a minister.

Local Italian Red Cross official Stefano Principato told reporters that Italy's health minister ordered an inspection of sanitary conditions for the migrants, who have been sleeping on the ship's deck and coping since Aug. 16 with a baking sun and limited toilet facilities.

After the medical exams, Catania's maritime health office ordered all 11 women aboard and five of the men to disembark, Principato said, and authorities awaited completion of paperwork so that could happen.

On Friday, many of them refused their meals in a sign of frustration for not being allowed off the ship. But on Saturday, migrants could be seen taking their lunch given to them by some of the Diciotti's 40 crew members.

Doctors have said many of the migrants on the ship have scabies but "more than a health emergency, it would be better to speak of a psychological emergency," Principato said.

Many of the migrants, including 27 unaccompanied minors who were allowed to disembark earlier in the week, have told Italian authorities they endured beatings and other cruelties while in Libyan detention facilities for months or even years, waiting to leave in human traffickers' unseaworthy boats toward Europe.

At least they have reached a European port. The International Organization for Migration says over 1,520 people have died so far this year trying to cross the Mediterranean Sea to get to Europe.