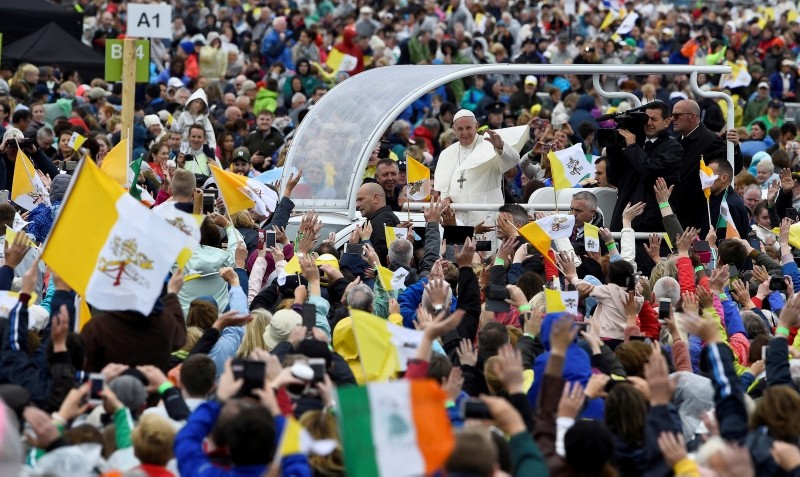 Pope Francis "begged for God's forgiveness" on Sunday for multiple abuse scandals within the Irish church but faced accusations by a former Vatican official that he had personally ignored allegations against senior clergy.

In front of 45,000 supporters at the rain-soaked Knock shrine in the west of Ireland, the pope sought forgiveness over the "open wound" of the church's sexual abuse scandal and demanded "firm and decisive" measures to find "truth and justice".

At a later Mass to tens of thousands of flag-waving worshippers at Dublin's Phoenix Park, the showpiece event of the two-day visit to the former Catholic stronghold, he also confessed to other abuses by the Irish church, including at its so-called "mother and baby" homes.

But in the city centre around 5,000 abuse victims and their supporters braved the weather to attend the "Stand for Truth" rally.

A woman dressed as a nun, with fake blood on her hands, and a man handing out homemade placards reading "the church protects pederasts" were among those protesting.

"I think it's obviously causing quite a lot of distress," abuse victim and campaigner William Gorry said of the visit.

"Healing is something that's going to take a long, long time if it's going to happen at all," he told AFP.

The scandal has dogged the visit, and intensified overnight when a former Vatican envoy to the US accused Francis of personally ignoring sexual abuse claims against prominent US cardinal Theodore McCarrick, who was forced to resign last month.

Archbishop Carlo Maria Vigano wrote in a letter published in the National Catholic Register that he had told Francis of the allegations in 2013, but that he had responded by lifting sanctions imposed on McCarrick by predecessor Pope Benedict.

"He (Pope Francis) knew from at least June 23, 2013 that McCarrick was a serial predator," wrote Vigano," adding "he knew that he was a corrupt man, he covered for him to the bitter end."

The Vatican said it had no comment to make on the claims.

"Holy Father, I ask that you use your office and influence to ensure that this is done here in Ireland and across the world," he said, calling the scandals a "stain" on the church and state.

The pope met eight abuse victims on Saturday, including a woman assaulted by a priest when she was in hospital aged 13.

Paul Jude Redmond, who was illegally adopted from a Church-run "mother and baby home" because his mother was unmarried, also met the pope. He said the pontiff appeared "genuinely shocked" by the stories of abuse.

But at a news conference in Dublin on Saturday by the group Ending Clergy Abuse (ECA), victim Mark Vincent Healey said the pope's speech in Dublin was a "total missed opportunity".

The pontiff is in Ireland to close the 2018 World Meeting of Families (WMOF) -- a global Catholic gathering that addressed issues including the treatment of gay people in the Church.

It is the first papal visit to Ireland since John Paul II spoke in front of 1.5 million people during a visit in 1979.

The Church's role and standing has been badly dented by the abuse scandals and the Irish have shed traditional Catholic mores, voting earlier this year to legalise abortion after approving same-sex marriage in 2015.

In Tuam, a town in western Ireland not far from Knock, hundreds joined in a silent vigil on Sunday in solidarity with victims of the "mother and baby" homes -- institutions accused of being punishment hostels for unwed pregnant women.

"Significant quantities" of baby remains found in makeshift graves at the site of one such home in Tuam last year shocked the country.

The abuse scandals in Ireland are part of a worldwide crisis for the Vatican.

A devastating report earlier this month accused more than 300 priests in the US state of Pennsylvania of abusing more than 1,000 children since the 1950s.

The Pope was due to head back to Rome late Sunday.