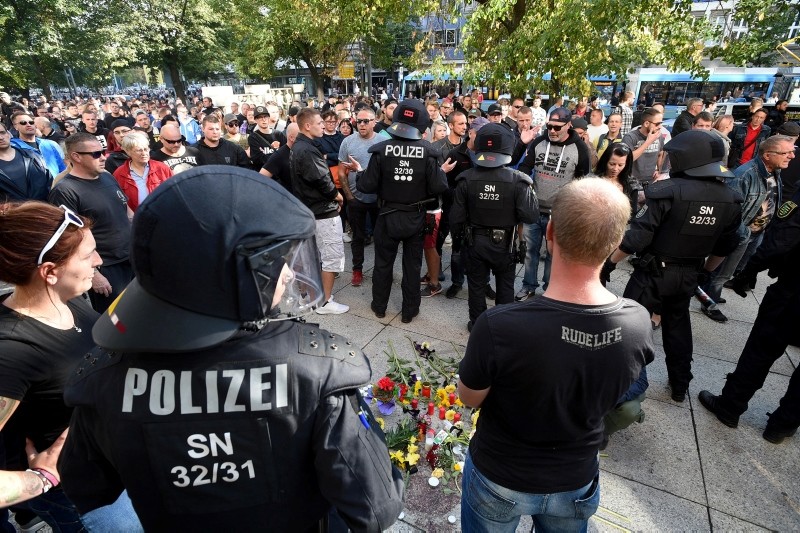 The German government has strongly condemned the behavior of right-wing extremists who spontaneously gathered in the eastern city of Chemnitz on Sunday for what it referred to as "hunts" against foreigners.

"What was witnessed in parts of Chemnitz yesterday and what was also recorded on video has no place in our constitutional state," said government spokesman Steffen Seibert on Monday, hours before another far-right protest was set to take place in Chemnitz.

"We will not accept such mob-like behavior, such hunts of people with a different appearance, a different heritage, or the attempt to spread hate on the streets - this has no place in our cities and I can state on behalf of the federal government that we strongly condemn this," Seibert said.

The comments came as far-right and leftist groups took to social media to call for further demonstrations on Monday. Sunday's spontaneous rally was held in response to the death of a German national in a fight earlier in the weekend.

A spokeswoman for the city of Chemnitz said Monday that police are investigating two cases of bodily harm, one case of intimidation and one case of resistance against law enforcement officers that allegedly took place during the Sunday right-wing rally.

The protest, which 800 people attended, was organized in response to the death of a 35-year-old German man after being involved in a fight with several people of different nationalities on Saturday night.

Local media reported that participants shouted violent threats towards immigrants and chanted "Wir sind das Volk" ("We are the people"), a slogan used by right-wingers who lament being overlooked by the government.

Video footage circulating on social media showed protesters attacking migrants and other people with a non-German appearance on the street, but a police spokeswoman was not able to verify the footage on Monday.

Two men aged 22 and 23 have been arrested and are under investigation for manslaughter in relation to the man's death. Police have yet to comment on the nationalities of those involved, citing the fact that the investigation is still at a nascent stage.

Anti-migrant and anti-foreigner sentiment and crimes against these groups have been on the rise in Germany since Chancellor Angela Merkel's decision to open Germany's borders to hundreds and thousands of migrants in 2015.

A burgeoning right-wing party, the Alternative for Germany (AfD), gained seats in the national parliament in the 2017 legislative elections largely as a result of the refugee crisis.