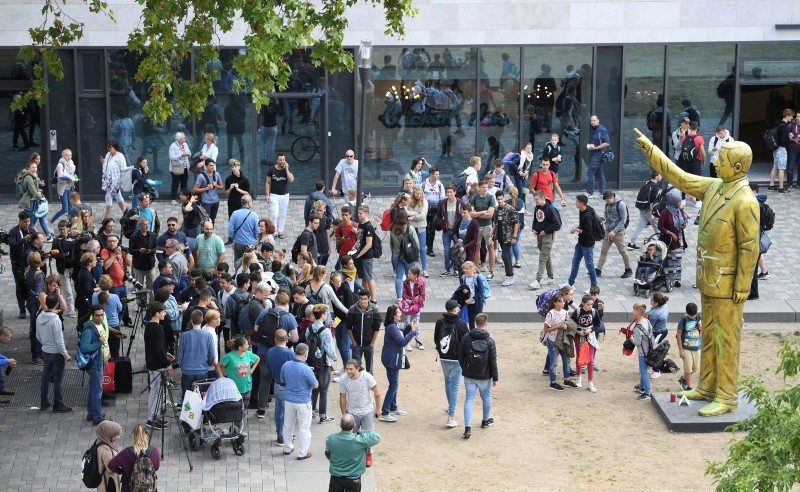 The local Wiesbadener Kurier reported the statue was put up in the city's downtown area Monday.

City authorities had authorized the statue as part of the ongoing Wiesbaden Biennale art festival, but didn't know Erdoğan would be the person depicted, the newspaper reported.

"We have received calls from a string of irritated citizens. It is not clear to people that it is part of the Biennale," a municipality spokeswoman said of the statue, which has since been covered in expletive-laden graffiti.

Profanity on the statue was reportedly later removed by another resident, who did not want the situation to escalate.

A Turkish-origin Wiesbaden resident told German daily Allgemeine Zeitung that the move was tactless and badly timed given that at least 20 people were injured during a far-right protest in the eastern city of Chemnitz.

"Tonight terrible things happened in Chemnitz, the more incomprehensible it is that such an action is being carried out at this time," the person who asked to remain anonymous said.

The larger-than-life statue depicts Erdoğan with a raised right arm, a pose which reportedly reminded some Wiesbaden residents of the iconic statue of former Iraqi dictator Saddam Hussein that was famously torn down in 2003 by U.S. military forces during the Iraq invasion.

This year's Biennale is taking place under the motto "Bad News." Festival organizers were not immediately available for comment.

According to the regional daily Wiesbadener Kurier, the Turkish Consul General in Frankfurt also called the town hall to get more information about the statue.

"He wanted to know that was happening in Wiesbaden. He is a little worried because Erdoğan is coming to Germany soon," said Head Mayor Sven Gerich.

The news comes exactly one month ahead of a state visit by Erdoğan to B​erlin.