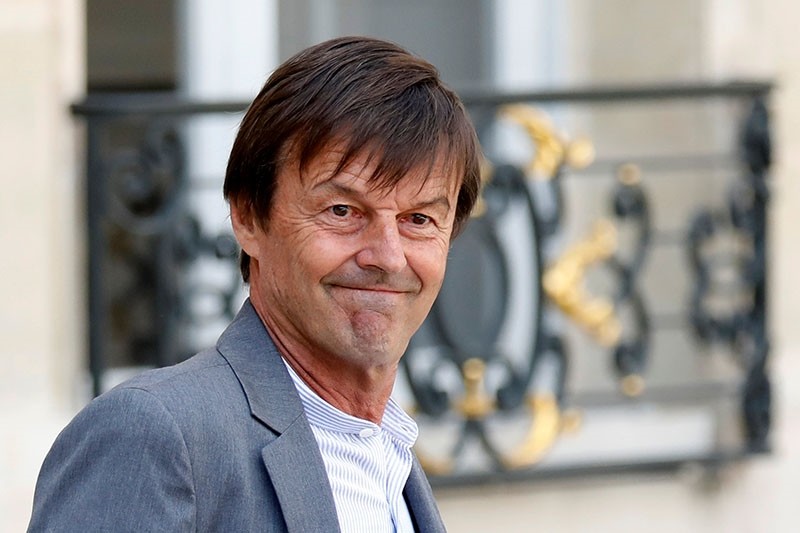 Nicolas Hulot, French Minister for the Ecological and Inclusive Transition, leaves after the first cabinet meeting after the summer break, at the Elysee Palace in Paris, France, Aug. 22, 2018. (Reuters Photo)
by Aug 28, 2018 12:00 am

French Environment Minister Nicolas Hulot announced his resignation on Tuesday, citing disappointment with the lack of progress on climate and other environmental goals.

Hulot said his decision, taken on Monday night, was the result of an "accumulation of disappointments" over the inadequacy of steps to tackle climate change, defend biodiversity and address other environmental threats.

A former TV presenter and green activist whose cabinet portfolio included energy, Hulot said on France Inter radio that he had not yet informed President Emmanuel Macron of his decision to resign.

Macron has not spoken to Hulot about his resignation, the presidency said on Tuesday.

"The job of minister, especially for those coming from civil society, is at the same time exhilarating and frustrating," a presidential adviser told Reuters.

"We perfectly understand that there should be a form of frustration, even exhaustion, which doesn't take away the quality of the work accomplished," the adviser said.

The official said Hulot's replacement had not been decided yet.

Hulot consistently scored high in popularity polls and his departure will be a blow to Macron, whose own ratings are plumbing new lows.

"I don't understand why he is stepping down when we had many successes in the first year that are to his credit," Griveaux told BFM Television. "He didn't win all his battles but that's the way it goes for ministers."

"It's a blow from which we'll recover," Griveaux added.

Hulot, who had been frustrated over the government's resolve to reduce France's reliance on nuclear power, announced his departure after the government said it would relax hunting laws, a measure aimed at boosting Macron's appeal in rural areas.

In his radio interview, however, he emphasized the inadequacy of "mini steps" taken by France and other nations to slow global warming and avert a collapse of biodiversity.

"I don't want to create the illusion that we are facing up to it," he said.