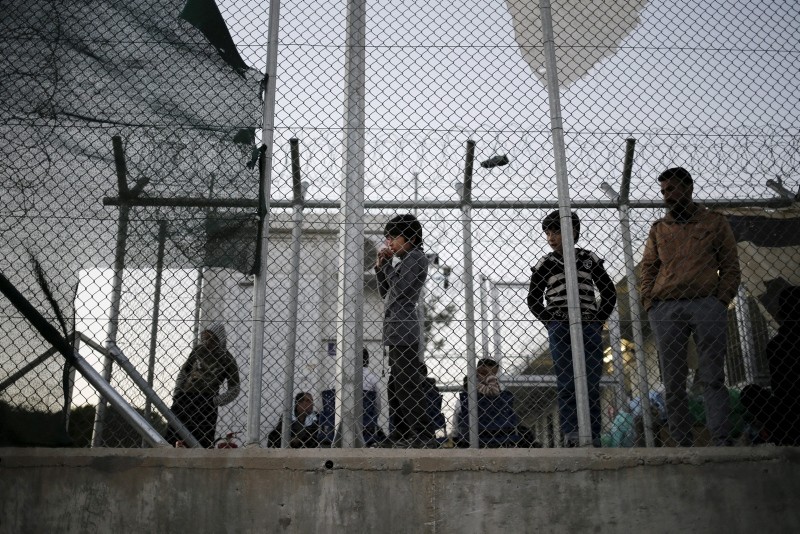 Unable to face the horrors of appalling living conditions in the Moria refugee camp on Greece’s Lesbos, refugee children as young as 10 have committed suicide, according to a report

A recent report highlighted the plight of refugees in a refugee camp located in European Union territory, with poor conditions, violence among residents and suicides among 10 year olds raising alarm bells.

The aforementioned camp is the infamous Moria Refugee Camp on the Greek island of Lesbos in the Aegean Sea, where some 8,000 refugees reside despite a 2,000 people capacity, according to the report of the U.K. public broadcaster BBC.

Lesbos, located some 9 kilometers away from the Turkish mainland, has been a key gateway into the European Union since the start of the bloc's migration crisis in 2015. At the height of the influx, some 5,000 migrants and refugees, mostly from war-torn Syria, landed on the island's beaches on a daily basis.

The report describes Moria as "the worst refugee camp on earth," and shows footage of violence between its residents due to overcrowding – a fight even breaks out in front of the BBC crew in the lunch queue where two people are stabbed.

"We are always ready to escape. 24 hours a day, we have our children ready and don't allow them to sleep in fear of war and fighting," says Sara Khan, a refugee woman from Afghanistan.

Luca Fontana from the medical charity Medecins Sans Frontieres (Doctors Without Borders - MSF) also describes the camp as the worst place he has ever worked at, despite his earlier work in West Africa during Ebola outbreaks.

Fontana explains that children as young as 10 are attempting to commit suicide and there are no child psychologists on the island. He says their efforts to move the children to capital Athens have been unfruitful. In a previous statement in Dec. 2017, the MSF said that some 40 percent of the refugees in Moria are children, including more than 400 unaccompanied minors. The number of refugees in the camp has increased by some 3,000 since then.

Several NGOs have fled from the camp in protest, where one tent is occupied by 17 people or each toilet is occupied by 70 people and the smell of raw sewage is all around.

The MSF also left but later was forced to open a clinic outside the camp due to widespread skin diseases resulting from poor hygiene, respiratory diseases from tear gas fired by the Greek police to end fighting or mental health problems.

Recalling a huge fight between Arab and Kurdish men leading hundreds of Kurds to flee the camp in May, the BBC report says the camp is plagued by extreme violence fueled by racism and sectarianism between Arabs, Kurds, Afghans and Sunnis and Shias.

One refugee describes the scene as "It's like the war in Syria and even uglier. We heard about rape cases there, sexual harassment."

Opened in 2015, the Moria camp was intended to be a transit location for migrants arriving in Lesbos during the mass influx of refugees that summer.

However, the Greek government does not allow them to go to the mainland as many central and eastern European countries have abruptly closed their borders to keep away migrants.

Meanwhile, a deal signed between the European Union and Turkey foresees the return of irregular migrants arriving in Greek islands to Turkey in exchange of European countries granting asylum to the same number of people from camps in Turkey, which currently houses more than 3.5 million refugees, mainly from Syria.

The BBC report cites EU figures that 71,645 new refugees arrived in Greece by sea while only 2,224 have returned to Turkey since the deal was signed. Many refugees have spent years in camps established to accommodate a much lower number of people for only couple of days.

A Greek high court ruled in April that migrants arriving in islands from Turkey could travel to the Greek mainland while their asylum applications were being processed. The ruling does not have a retroactive effect, meaning that migrants already there will not be allowed to leave.

The camp's Greek government representative George Matthaiou says it is not Greece but the EU who bears responsibility for the poor conditions.

Conditions not bright outside Moria either

Moria is not the only place where refugees suffer from poor conditions, discrimination or violence. In May, a general strike virtually shut Lesbos as residents protested the European Union and the Greek government for their migration policy. Most businesses, shops, cafes and local government offices joined the strike, which also found support in the nearby island of Chios.

In April, a far-right group attacked Afghan migrants protesting their conditions in the island's main town of Mytilene with bottles, fire crackers and lighting flares. Tensions spiraled further when left-wing activists arrived in support of the migrants and started fighting with far-right supporters. The police had to use tear gas to clear the town's square. When clashes ended, dozens were wounded and Afghan migrants were sent to Moria.

The incident also led to a wider crackdown on migrants in Lesbos where police rounded up dozens of migrants from various parts of the island and sent them to Moria. NGOs and aid groups also witnessed difficulties in their operations. Recently on Tuesday, Greek police said they had arrested three members of a Greek NGO on suspicion of helping migrants to illegally enter the country.

The members of the Emergency Response Centre International (ERCI) were detained in Lesbos for being in contact with migrants on social media and "actively assisting" their illegal entry into Greece from 2015 onwards, according to a police statement.

"The activities of an organized criminal network that systematically facilitated the illegal entry of foreigners were fully exposed," the statement said.

Among those arrested was Sara Mardini, a 23-year-old Syrian refugee student and scholarship recipient of Bard College in Berlin. Alongside her sister Yusra -- a UNHCR goodwill ambassador -- she participated in the refugee team at the Rio 2016 Olympics.

A year earlier, the sisters had employed their swimming skills to pull the water-logged boat that brought them over from Turkey with another 18 people onboard.

"They did nothing wrong, they want to help people out of idealism," said Yusra's swimming coach Sven Spannekrebs.

"I was on Lesbos a few weeks ago and saw what all the volunteers are doing: A great job," he told AFP via email.

Spannekrebs said Mardini and another detainee, Sean Binder, were "long term volunteers for ERCI (and) never engaged in any illegal activity as suggested by the authorities."

He also cast doubt on the claim that the activists were illegally listening in on encrypted coastguard radio.

"The channels that the radios had access to are open to anyone to listen," the coach said.

Police said two ERCI activists had already been arrested in February onboard a jeep with concealed fake army license plates. The ERCI did not immediately respond to a request for comment.

Earlier this year, three Spaniards and two Danes were also accused of trying to help migrants illegally enter Greece. They were cleared in court in May.

Lesbos now has the highest concentration of migrants in Greece, which houses some 10,000 refugees compared to a population of 27,000. Conditions are also similar in the Greek islands of Chios, Samos and Kos, which all have been overwhelmed by the refugee flow due to their geographical proximity to Turkey.

The refugee influx came at a time when Greece declared its bankruptcy and in general, Greek islands were particularly affected by the country's debt crisis and subsequent austerity measures due to high living costs and the lack of many basic goods that need to be transported from the mainland. The country's deteriorating image amid violent anti-austerity protests also took a heavy toll on tourism, the backbone of the islands' economy. Refugees arriving by thousands every day did not help to improve this image, and further deteriorated living conditions for the islanders.

Meanwhile, the entire country has witnessed a rise in far-right violence due to dire economic conditions and the overall rise of populist and far-right movements in Europe and the world. Many refugees or their safe houses in mainland Greece have been attacked mainly by the far-right Golden Dawn party's supporters over the last couple of years.

Across the Aegean Sea, Turkish officials are also trying to control their borders with Syria, Iraq and Iran exceeding 1,800 kilometers, save civilians fleeing from combat zones in Syria and Iraq, and accommodate a refugee population that exceeded four million at its peak.