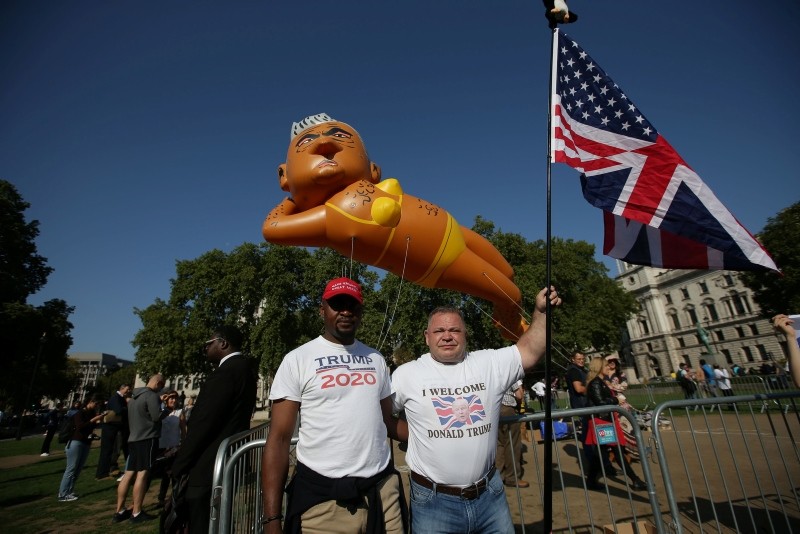 The nearly 10-meter balloon, showing the London mayor in a yellow bikini, was launched as a riposte to Khan's decision to allow a blimp of Donald Trump to fly during the US president's official visit to Britain earlier this year.

The happening, organized by Yanny Bruere, an ardent Trump supporter who has campaigned against Khan, aims to highlight how violent crime has allegedly risen in the capital under Khan.

On a Crowdfunder page set up to fund his protest, Bruere said: "In light of the Donald Trump 'Baby Trump' balloon being allowed to fly over London during his visit to the U.K., let's get a 'baby Khan' one and see if FREE SPEECH applies to all and whether or not Mr Khan and the London assembly will also approve this."

"Under Sadiq Khan, we have seen crime skyrocket to unprecedented levels. People in London don't feel safe and they aren't safe, 81 murders this year alone! Khan Out," he added.

Although around 9,000 people had expressed their interest in attending the event on Facebook, only 100 people were present on Saturday, with a handful of tourists also taking an interest in the balloon.

Addressing the crowd, Bruere said: "I think a certain amount of respect should be afforded to the leader of the free world and the greatest ally the U.K. has -- the president of America".

"If people want to spend their Saturday looking at me in a yellow bikini they're welcome to do so. I don't really think yellow's my color though," Khan told local media.

The bikini is a reference to an advertisement Khan banned from the city's transport network that showed a young woman in a skimpy yellow bikini asking, "Are you beach body ready?"

He said the weight loss ad was demeaning, but opponents argued banning it was an attack on free speech.