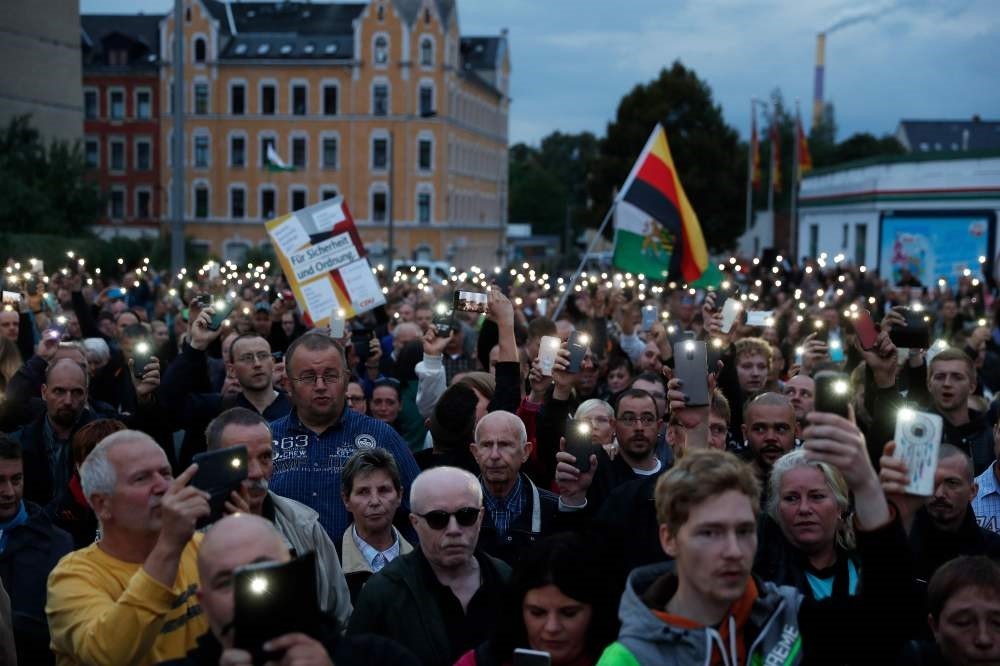 Anger over the suspected killing of a man by two refugees has sparked days of protests in this eastern German city, raising fresh concerns about the anti-migrant sentiment that has shaken up German Chancellor Angela Merkel's government.

On Thursday, as hundreds of people protested nearby, the region's governor tried to reassure a tense town hall meeting that the fatal stabbing of the 35-year-old German citizen wouldn't go unpunished.

"The wheels of justice move slowly, but they are thorough," Gov. Michael Kretschmer told an at times hostile crowd at the Chemnitz soccer stadium.

Anti-migrant groups seized on Sunday's slaying of Daniel Hillig, a carpenter from Chemnitz, mobilizing thousands to a protest the following day. At least 18 people were injured when far-right extremists in the crowd clashed with counter-protesters Monday.

Footage of snarling skinheads chanting "Foreigners! Germany for Germans!" and hurling bottles as police struggled to keep the peace evoked memories of far-right violence that occurred in Germany during the 1990s, and, for some, of its dark Nazi past.

Kretschmer, a member of Merkel's center-right party, warned that Saxony's image could suffer if foreigners get the feeling they aren't safe there anymore. He cited an encounter with a Chinese woman earlier Thursday who told him she had been made to feel unwelcome in Chemnitz this week for the first time since moving there several years ago.

The demonstration had been called by Pro Chemnitz, a right-wing group with some 18,000 followers that has been at the center of demonstrations in the city following the stabbing of a 35-year-old German in the early hours of Sunday.

The leader of the far-right Alternative for Germany (AfD) party on Friday defended right-wing riots. "Going nuts is legitimate after a crime like this," Alexander Gauland told public broadcaster ZDF five days after the fatal stabbing of Daniel H in the eastern city of Chemnitz prompted violent demonstrations by right-wing extremists. "It is of course not legitimate that people are being hunted down, and what is of course not legitimate is giving Hitler salutes," said Gauland, referring to random attacks on people with a non-German appearance that took place at the sidelines of the rallies on Sunday and Monday.

The eastern state of Saxony, where Chemnitz is located, has long been a hotbed of anti-migrant sentiment. where anti-immigrant pressure groups including PEGIDA and the Alternative for Germany (AfD) political party have their heartlands.

The AfD was founded in 2013 and first gained seats in Germany's national parliament after elections last year. Pegida, or Patriotic Europeans against the Islamization of the West, was founded around the same time and gained traction during the refugee crisis. Starting as a Eurosceptic party just five years ago, AfD party got a boost in 2015 after Chancellor Angela Merkel announced an open-door policy to refugees fleeing places like Syria and Afghanistan.

The surge in foreigners stoked public concerns, which helped the AfD enter the national parliament last year as the main opposition party as many of the millions who entered Germany and Europe did so illegally. The party's success has also prompted pushback from various groups under the umbrella organization "Stop the Hate."