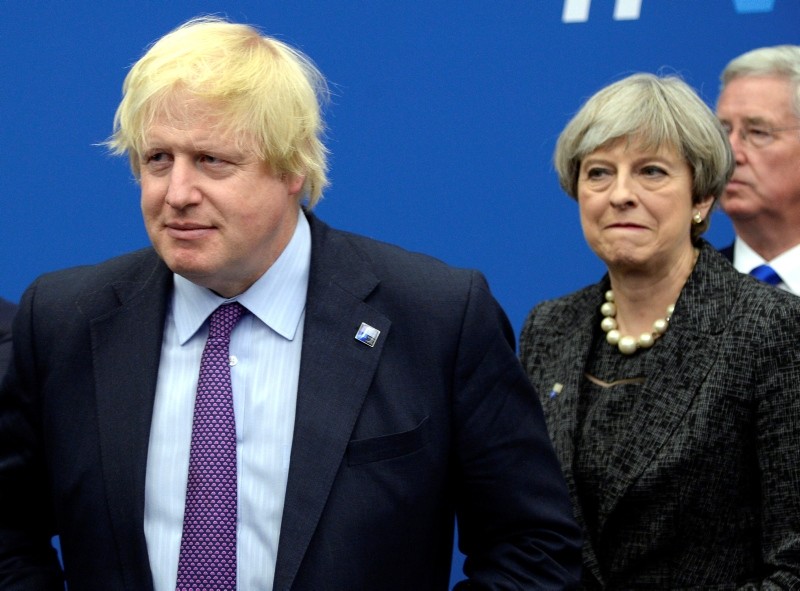 In this, May 25, 2017 file photo British Foreign Secretary Boris Johnson, left, and Britain's PM Theresa May arrive for a meeting during the NATO summit of heads of state and government in Brussels. (AP Photo)
by Associated Press Sep 03, 2018 12:00 am
Former British Foreign Secretary Boris Johnson slammed Prime Minister Theresa May's Brexit policy in a newspaper column Monday, heightening speculation that he plans to challenge her leadership.

Johnson wrote in the Daily Telegraph that May's so-called Chequers plan for continued close economic ties with the European Union would leave Britain tethered to the bloc and getting little in return.

Johnson said that Britain has "gone into battle with the white flag fluttering over our leading tank" and had agreed to pay a 40 billion pound ($51 billion) divorce bill in return "for two-thirds of diddly squat."

Britain is due to leave the EU in March, but negotiations on a divorce deal have stalled amid divisions within May's Conservative government over how close an economic relationship to seek with EU.

A proposal hammered out by May's Cabinet in July at the prime minister's Chequers country retreat proposes keeping the U.K. aligned to EU regulations in return for free trade in goods.

The plan infuriated Brexit-backers in May's Conservative party including Johnson, who quit the government in protest. Johnson claims the Chequers deal would prevent the U.K. from striking new trade deals around the world.

"We will remain in the EU taxi; but this time locked in the boot (trunk), with absolutely no say on the destination," Johnson wrote. "We won't have taken back control — we will have lost control."

May's official spokesman, James Slack, said Johnson's opposition to the Chequers plan was well known, and there were "no new ideas in this article to respond to."

"What we need at this time is serious leadership with a serious plan and that's exactly what the country has with this prime minister and this Brexit plan," he said.

With Parliament due to return Tuesday from its summer break, Johnson and his fellow Brexit enthusiasts are not the only obstacle May faces as she tries to get her Brexit deal past the Conservative Party, Britain's Parliament and the EU.

The deal has been received coolly by EU leaders, who warn Britain cannot "cherry pick" aspects of membership in the bloc without the full cost and responsibilities.

On Monday Conservative supporters of "soft Brexit" put forward a rival proposal, arguing that Britain should stay in the EU's single market for goods and services for three years after Brexit while it negotiates a future free trade deal with the bloc — a plan summed up as "Norway, then Canada," a reference to those countries' trade relations with the EU.

Conservative lawmaker Nick Boles said the idea was better than the Chequers proposal, which had "close to zero" chance of being approved by Parliament.

"What I want is a plan that's workable," Boles told the BBC. "We can't get to Nirvana in one step."

Meanwhile, pro-EU campaigners are pushing for a new referendum on any deal agreed between Britain and the EU.