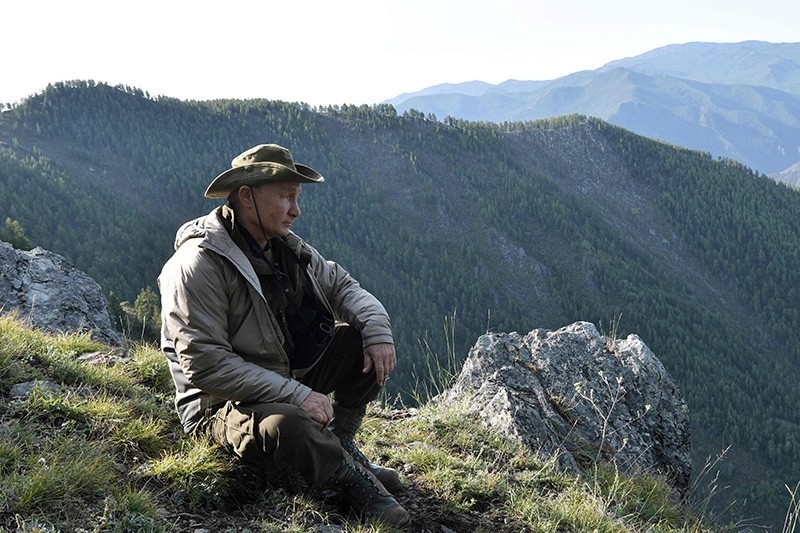 A picture taken on Aug. 26, 2018, shows Russian President Vladimir Putin sitting on a mountain ridge during a short vacation in the remote Tuva region in southern Siberia. (AFP Photo)
by Daily Sabah Sep 04, 2018 12:00 am

Vladimir Putin is now a reality TV star, as Russian state television has kicked off a weekly show for the president in an attempt to stem declining popularity.

The hourlong episode 1 of "Moscow. Kremlin. Putin" showed Sunday evening on Rossiya-1 TV, giving a look into the president's life over the past week, including meeting with students in Sochi and a vacation in Siberia. The episode also featured positive conversations on Putin's pension reform – a controversial initiative that has cost the president popularity points.

The show – which will attempt to show how the president's week went – unabashedly praises Putin as a strong, energetic and attentive leader.

Peskov also said the 65-year-old leader exercises for 90 minutes every day – as one of the show's clear themes is Putin's physical fitness.

Discussing Putin's intense hiking and boating activities on his Siberian vacation, one Russian on the show marvels, "I don't really understand how such a schedule is maintained, such a marathon. It's physically very difficult."

Peskov said Monday the show is the initiative of the state television company, not the Kremlin.

"It is important for us that information about the president and his work schedule is shown correctly and without distortion," he said.

The show is debuting as Putin's popularity has fallen to a seven-year low amid the proposal to raise pension ages. About 89 percent of Russians are against the plan, a Levada Center poll said in July. The poll also found Putin's approval rating fell to 67 percent in July from 79 percent in May.