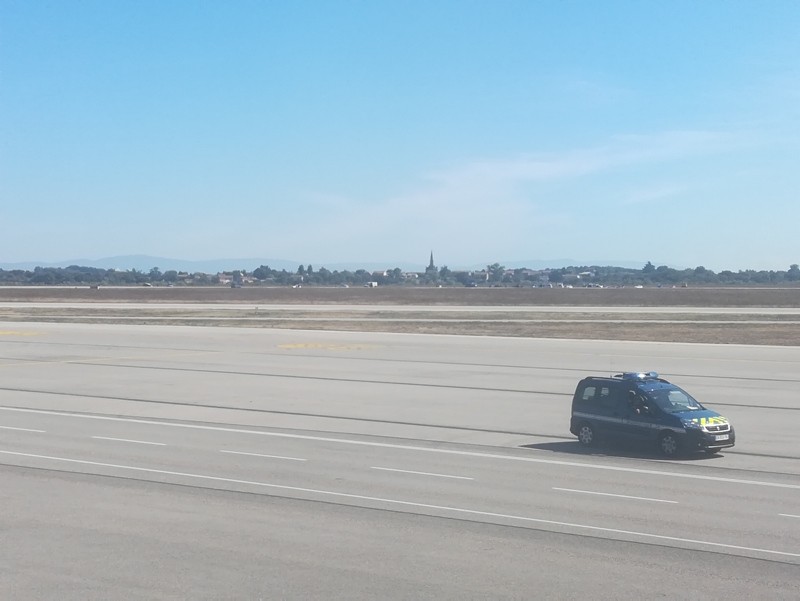 French gendarmes vehicle speeds on the tarmac of Lyon's Saint-Exupery airport on September 10, 2018 as a man was arrested by the police after having managed to get in the runways with his car without doing any injury. (AFP Photo)
by Associated Press Sep 10, 2018 12:00 am
Pursued by police vehicles, a man smashed his car Monday into security barriers at two airports in Lyon, southeast France, and then crashed through two glass doors of a busy terminal and sped onto the runway, before being arrested.

In scenes captured on amateur video, the car was seen hitting a bump, then going airborne and landing in a cloud of dust at Lyon's international Saint-Exupery airport. The driver then jumped out while the vehicle was still rolling and sprinted off on foot, pursued by a police van.

Other police vehicles and officers on foot then tried to cut off his escape until one of them managed to catch up with the suspect and wrestle him to the ground, the video showed.

The incident raised questions about the security procedures across European airports and how the man managed to reach the apron — the most secure place in an airport — without being stopped as the footage shows police would still have been unable to halt the suspect if it weren't for the bump.

The man's motives were unknown and nothing was being ruled out, regional government press officer Christelle Monteagudo said.

The man was first spotted driving the wrong way on the A43 highway that links Lyon to the Alps. Highway police and a police helicopter laid chase, the regional government said in a statement.

The man then rammed into security barriers at Lyon's Bron airport used for business flights, before driving to the nearby, larger Saint-Exupery airport, where flights were quickly suspended.

There, the man rammed through more security barriers. Still chased by police, he then crashed through two glass doors at the airport's Terminal 1 to drive onto the runways, authorities said.

All air traffic at the airport was halted. There were no casualties, authorities said.

The Lyon prosecutors' office is investigating.