Tension escalates in Greece ahead of Macedonia name change referendum 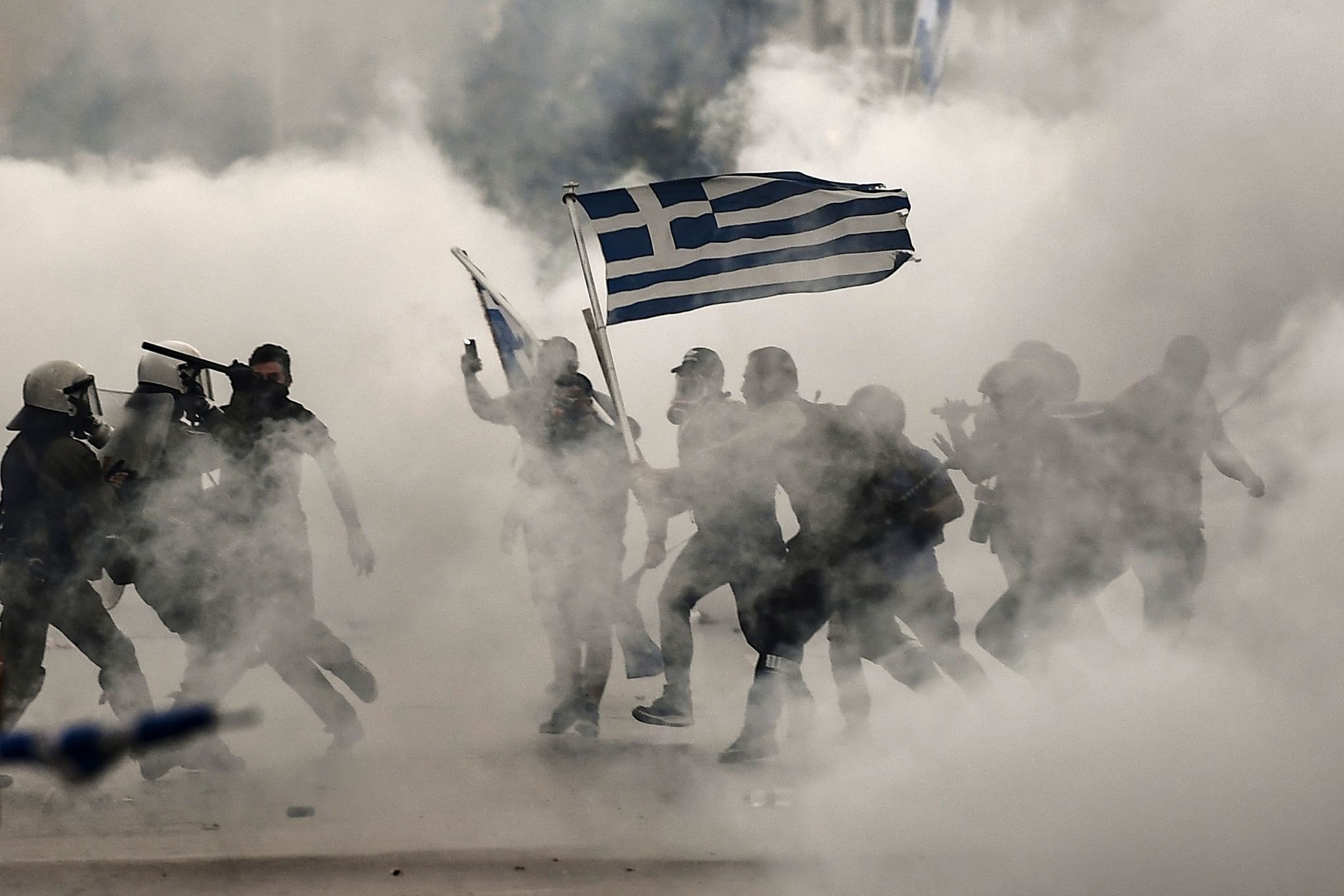 Protesters clash with police during a demonstration against the agreement reached by Greece and Macedonia, Thessaloniki, Sept. 8.
by Compiled from Wire Services Sep 10, 2018 12:00 am

As Macedonians prepare for a name change referendum despite strong opposition, protests against the historic deal are also growing in Greece

Thousands of Greeks protested in the northern city of Thessaloniki on Saturday over a deal with neighboring Macedonia to end a decades-old dispute over its name.

Athens and Skopje reached a deal in June ending years of acrimony between the two countries over the name of the tiny Balkan state, but it has triggered a furious response from many Greeks.

On Saturday, police fired teargas at a group of individuals who broke away from a main group of demonstrators and hurled stones at riot police. State TV showed images of riot police chasing protesters close to barriers erected around a commercial park where an annual trade fair was taking place. Prime Minister Alexis Tsipras was due to deliver a policy address later at the heavily guarded venue. Police sources estimated the number of protesters at more than 15,000, many waving the white and blue Greek flag.

"Macedonia is only Greek," some of the protesters shouted, along with nationalist and rightwing extremist slogans, as reported by dpa.

Skopje has called for a referendum on Sept. 30 on the agreement with Greece to change its name to the Republic of North Macedonia. But many Greeks oppose any name that includes Macedonia.

On Saturday, German Chancellor Angela Merkel urged Macedonians to embrace the deal with Greece to secure membership in NATO and the European Union.

The vote is "a historic chance," Merkel said in a joint news conference with Prime Minister Zoran Zaev, who agreed to the new name with Greece in June. The change, which would need to be woven into the country's constitution if approved, is a condition laid out by Athens to lift a blockade on Skopje's NATO membership and EU accession talks.

Speaking to reporters, Merkel said the EU and NATO were not threatening opponents of the name change with Macedonia's isolation if it is not approved, but that such isolation was a condition of terms laid out by another member country.

Her trip followed visits by NATO Secretary-General Jens Stoltenberg on Thursday and Austrian Chancellor Sebastian Kurz on Friday. Both diplomats urged Macedonians to turn out in high numbers to vote on the new name, with Stoltenberg promising an open door to NATO in the event of a positive outcome and Kurz saying it would "pave the way" for the country to join the European Union.

Athens claims the name of Macedonia for its northern province, and has been accusing its neighbor of territorial aspirations towards the province and its legacy; for this reason, Greece has blocked Macedonia from joining NATO and promised to do the same in the European Union. Following the agreement in June, Greece lifted its NATO veto in July, but will ratify a membership treaty only if the name change is backed in the referendum and sealed with constitutional changes. Nationalists in both countries oppose the deal, but in Macedonia a recent survey indicated growing support for NATO and the EU.