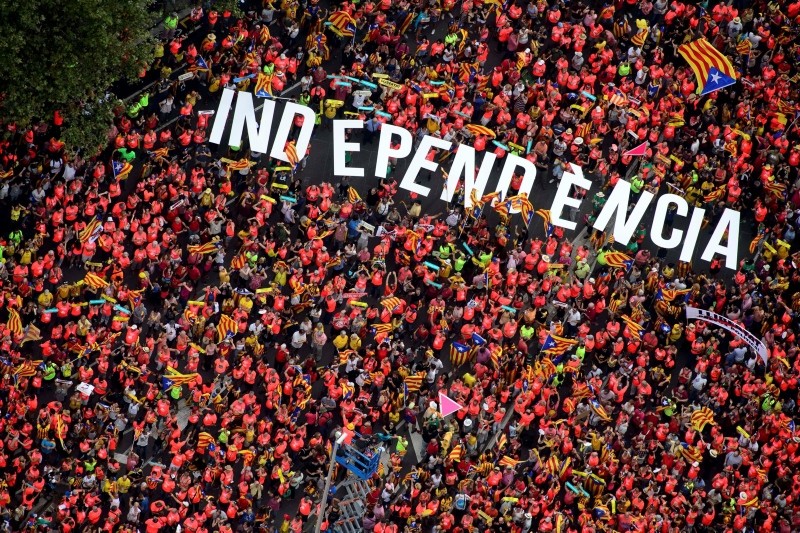 Hundreds of thousands of Catalan separatists let out a collective shout as they marched along a main artery in Barcelona on Tuesday, marking the first of a series of mass mobilizations demanding independence from Spain and the release of several high-profile secessionists from jail.

With the official slogan "Let's Make the Catalan Republic" printed on pink T-shirts and signs, protesters went silent at 5.14 p.m., which on a 24-hour clock is 1714 — the year when Barcelona fell in the Spanish War of Succession.

A loud cheer and cries of "independence" and "freedom" followed, sweeping along a six-kilometer (3.7-mile) -long stretch of the city's Diagonal avenue. In a giant symbolic wall, protesters toppled the image of a king of spades playing card, in an apparent rejection of the Spanish monarchy.

Barcelona's local police estimated around 1 million protesters took part. Grassroots organizers said that 470,000 people had signed up online for the rally, with many more expected to join in.

The march on the traditional Sept. 11 holiday in Catalonia called "la Diada" has drawn similarly huge crowds of secession supporters in recent past years.

This year's demonstration comes nearly one year after an illegal referendum on secession held by Catalan authorities led to an ineffective independence declaration that received no international recognition. Catalan separatist leaders and activists who pushed it, defying Spain's constitutional protection of territorial integrity, are either in prison awaiting trial or have fled the country.

Quim Torra, Catalonia's regional president, said Tuesday that while maintaining his pledge to see through the breakaway bid, his immediate focus is on putting pressure on the courts ahead of the trials of the separatist movement's jailed leaders.

Torra's goal is to stoke public showings of strength on Oct. 1, the anniversary of the referendum that was met by a police crackdown, the failed declaration of independence last Oct. 27, and the imminent start of the trials.

"In the coming weeks we are going to put all out efforts into denouncing" the situation of the jailed separatists, Torra said. "If the prisoners are not absolved, my government and the Catalan Parliament will take necessary action."

Some within the secessionist movement want Torra's government to immediately try again to unilaterally break with Spain.

"We have come here today to demand once again freedom for Catalonia," said 57-year-old Lourdes Casajus, who came from her home in Vic, a town in the Catalan heartland, to join the separatist rally. "Last Oct. 1, we voted in a referendum and the majority for independence wasn't respected. This Sept. 11 we demand that all the politicians, both from there and ours here, respect the people's will."

Torra, who came to power after secessionist parties won a regional election, has met with Spanish Prime Minister Pedro Sanchez and is planning a second meeting, in what is considered a thawing of relations between Madrid and Barcelona. Torra wants Spain's new center-left national government to agree to a binding independence referendum, while Sanchez will only offer a vote on increasing northeastern Catalonia's already considerable degree of self-rule.

Catalonia's separatist political parties, which hold seats in Spain's Parliament, have failed to garner support to amend the Spanish Constitution to allow a vote on secession.

Sanchez issued an appeal to "start a dialogue between Catalans" on Tuesday.

Polls and official election results indicate that roughly half of Catalonia's 7.5 million residents are against severing century-old ties with the rest of Spain. Catalans have family in other parts of Spain, share in its cultural traditions and speak Spanish along with Catalan.

Non-separatists often say they no longer feel welcome at "la Diada," which they say has ceased to be a celebration of Catalan identity and become a political rally.

"I have attended almost all of Catalonia Day celebrations," 51-year-old Victor Pozanco said. "But five years ago I stopped attending. I don't want to be counted as another separatist simply by attending the rally. Because I am not one of them, but I am Catalan."

There are also those who feel that the tensions that have arisen because of the secession question are taking an ugly toll on families and friendships.

"I am in the middle," 53-year-old cafe owner Nelida Adell said. "I have more affinities with the separatists but I also have family ties in the rest of Spain. So I don't want a radical break. I would like tensions to decrease. I fear things could get out of hand."