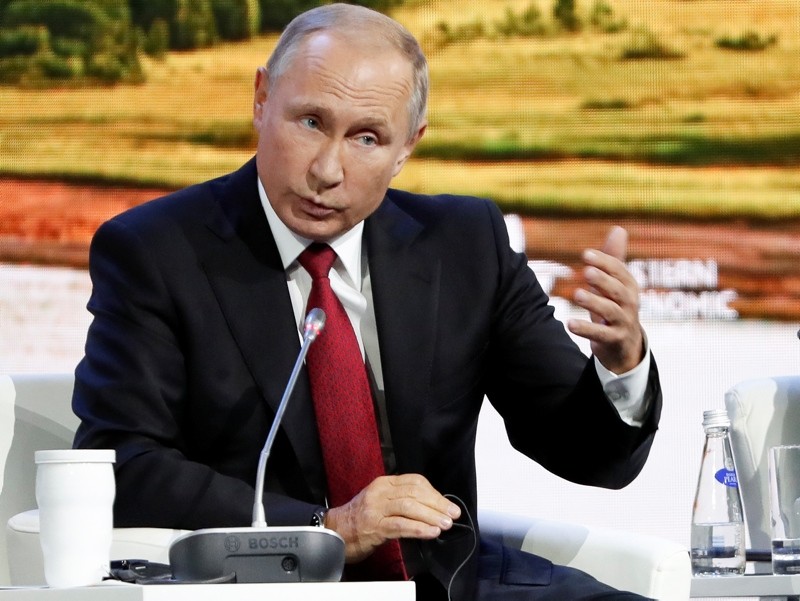 Russian President Vladimir Putin gestures as he speaks during a plenary session at the Eastern Economic Forum in Vladivostok, Russia, Wednesday, Sept. 12, 2018. (AP Photo)
by Compiled from Wire Services Sep 12, 2018 12:00 am

British prosecutors last week identified two Russians who they said were operating under aliases - Alexander Petrov and Ruslan Boshirov - who they said had tried to murder the Skripals with a military-grade nerve agent in England.

Speaking at an economic forum with Japan's Shinzo Abe and China's Xi Jinping in the far eastern city of Vladivostok, Putin urged the men to address the media and said there was "nothing criminal".

"We know who they are, we have found them," Putin said.

"They are civilians, of course," he said, apparently responding to a claim by the British authorities that the two suspects are members of Russia's military intelligence agency.

"Well, I hope they will come out themselves and speak about themselves. It will be better for everyone," he said.

"There's nothing particularly even criminal about it, I assure you. We'll see soon..."

Britain has said the two suspects were Russian military intelligence officers almost certainly acting on orders from high up in the Russian state. Russia has repeatedly denied any involvement in the incidents.

Skripal - a former colonel in Russian military intelligence who betrayed dozens of agents to Britain's MI6 foreign intelligence service - and his daughter were found slumped unconscious on a bench in the English city of Salisbury in March. They spent weeks in hospital before being discharged.

A woman near Salisbury, Dawn Sturgess, died in July and her partner Charlie Rowley fell ill after Rowley found a counterfeit bottle of Nina Ricci perfume containing Novichok and brought it home.