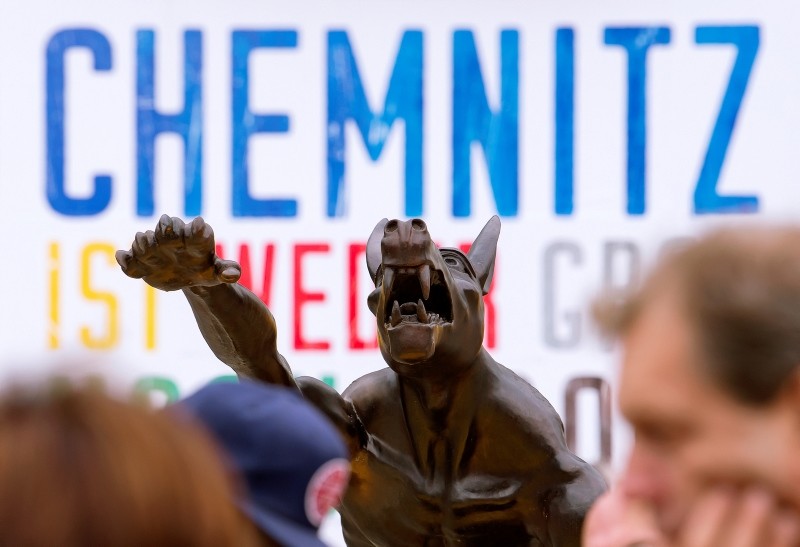 A German man was found guilty on Thursday of performing an illegal Hitler salute during a march held in Chemnitz, where violent protests by far-right radicals have reignited a debate about how to deal with fringe groups harbouring Nazi sympathies.

The demonstrators were protesting over a fatal stabbing blamed on migrants that set off the worse far-right violence in decades, exposing deep divisions over Chancellor Angela Merkel's liberal immigration policies.

The district court in the eastern city sentenced the 33-year-old to an 8-month suspended sentence and ordered him to pay a fine of 2,000 euros ($2,325). A court spokesman also said the man had been put on probation for three years.

The man was also found guilty of attempting to physically harm a policeman who had approached him after he had raised his arm in a Hitler salute, illegal under Germany's post-World War Two constitution, during the protest two weeks ago.

The man had taken part in a march through Chemnitz on Sept. 1 organized by the anti-Islam PEGIDA group and the Alternative for Germany (AfD) far-right party that went largely peacefully. Leftist protesters held their own counter-demonstration.

The sturdy bearded man walked into the court room wearing a blue jacket and jeans and said no word as he walked past journalists before the verdict was delivered behind closed doors. His name was not made public under German privacy rules.

Right-wing radicals have clashed with police, chased people they deemed to be migrants, and attacked a Jewish restaurant in Chemnitz after authorities named a Syrian and an Iraqi as the main suspects in the stabbing of a German man late in August.

The head of Germany's domestic intelligence agency has faced calls to resign after he said he was unsure videos circulating online showing far-right radicals hounding migrants in Chemnitz were real.

A second man is also expected to appear in court this week on similar charges.