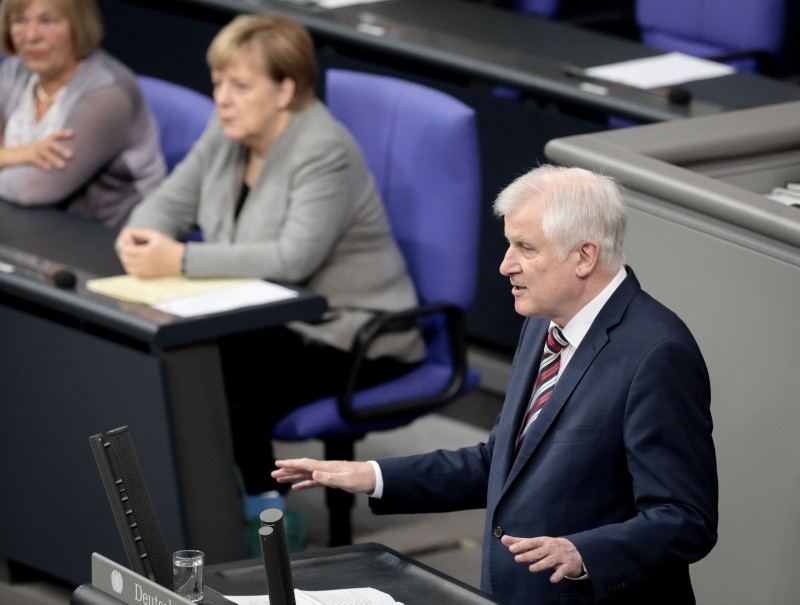 German Interior Minister Horst Seehofer gives a speech during a sitting of the Bundestag, Germany's lower house of parliament, on the 2019 federal state budget in Berlin on September 13, 2018. (AFP Photo)
by Compiled from Wire Services Sep 13, 2018 12:00 am

Germany has finalized an agreement with Italy to return migrants who are intercepted at the German-Austrian border, German Interior Minister Horst Seehofer said on Thursday, after weeks of difficult negotiations with the anti-immigrant government in Rome.

"The deal with Italy is closed. It is just missing two signatures, from the Italian colleague and from me," Seehofer told the German parliament on Thursday, in reference to his counterpart, Matteo Salvini.

An Italian Interior Ministry source said Salvini would discuss the issue with Seehofer on Friday in Vienna, where both ministers are expected to attend an EU conference, and clarified the concept of "zero net effect."

Salvini talked about it on Monday, saying that he would sign a deal with Germany only it did not lead to Italy "having to take care of a single additional migrant."

The ministry source explained that for 100 migrants returned from Germany to Italy, 100 migrants presently in Italy would have to be redistributed to other EU nations - leading to a "zero" net change in Italian migrant numbers.

The agreement comes after the German government agreed in August with both Greece and Spain to send migrants back to those countries within 48 hours if they have already applied for asylum there.

Italy has been a first port of call for many migrants coming to the European Union, and the bloc's rules stipulate that incomers should seek asylum in the first EU country they set foot in.

But in recent years, as mass arrivals stretched the reception capabilities of Mediterranean states like Greece and Italy, the rules proved difficult to implement.

As a result, many migrants have travelled on to Germany and other northern EU nations.

Earlier this year, Chancellor Angela Merkel avoided the break-up of her coalition by promising to put an end to this phenomenon, forging deals to send back migrants to the EU nations where they first registered as asylum seekers.

Her government has since managed to clinch return agreements with Portugal, Spain and Greece.

Seehofer, a hardliner on migration, had threatened to start unilaterally turning away migrants at Germany's southern border in what Merkel feared would have created tensions with neighboring countries.

Salvini, who is also deputy prime minister and leader of the right-wing nationalist League party, has also taken a tough stance on migration. Notably, he has de facto banished migrant rescue ships from docking in Italian ports.

The deals are part of a compromise between Merkel's Christian Democrats (CDU) and Seehofer's Bavarian Christian Social Union (CSU) that appears to resolve a dispute over returning migrants that nearly split them and brought down the government.

More than 1.6 million migrants have arrived in Germany since mid-2014, provoking tensions and propelling the far-right Alternative for Germany (AfD) into the national parliament.

Merkel has repeatedly defended her 2015 decision to admit hundreds of thousands of migrants as a humanitarian necessity, but has since vowed to prevent a re-run of such an influx.