'No-deal' Brexit? Here's what it means for consumers and businesses in Britain 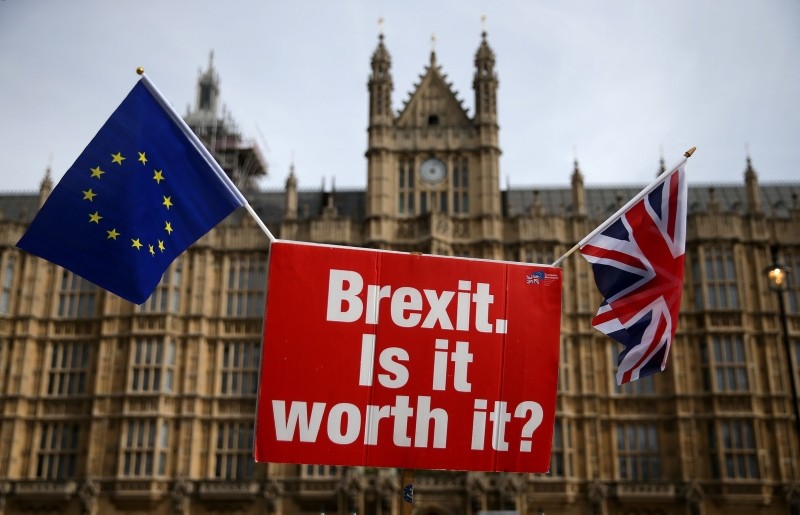 A sign that reads ,Brexit. Is it worth it?, as demonstrators protest outside the Houses of Parliament in central London on September 10, 2018. (AFP Photo)
by Compiled from Wire Services Sep 13, 2018 12:00 am

Britain published new advice to businesses and the public on Thursday about how to cope with the disruption that leaving the European Union without a divorce deal would cause to everything from data protection to driving licenses.

Recent signals from Brussels have buoyed hopes that the United Kingdom and the EU can agree and approve a proper divorce agreement before the U.K. leaves on March 29, though the sides are still divided on about one fifth of the detail of a deal.

But many business chiefs and investors fear politics could scupper a deal, thrusting the world's fifth largest economy into a "no-deal" Brexit that they say would weaken the West, spook financial markets and silt up the arteries of trade.

Britain has stepped up planning for the effects of such a departure and on Thursday published 28 technical notices covering the impact on areas including environmental standards, mergers and certification for manufacturers.

Brexit minister Dominic Raab said a no-deal Brexit was unlikely, but that the United Kingdom would manage the challenges and eventually flourish.

"With six months to go until the U.K. leaves the European Union, we are stepping up our 'no deal' preparations so that Britain can continue to flourish, regardless of the outcome of negotiations," Raab said.

The notices, often a few pages per sector, also covered the implications for space programs, trading in drug precursors and reporting CO2 emissions for new cars.

Below are the highlights:

Britons may have to pay more to use their mobile phones in EU countries because caps on data roaming may no longer apply. However, the British government will legislate to impose a cap of 45 pounds per monthly billing period. Britain's biggest operators - EE, O2, Vodafone and 3 - have already said they had no current plans to change their approach to mobile roaming after Brexit.

British blue passports will start being issued from late 2019. British citizens will need a passport to have been issued in the last ten years and have at least three months' validity to travel to the EU.

The British government will no longer participate in any development of the European Union's Galileo satellite navigation system.

Irish citizens will still have the right to enter and remain in Britain as now. There will be no routine immigration controls on journeys between Ireland and the United Kingdom.

British organizations would need to take action to ensure they could continue to receive personal data about their customers in the EU.

GOODS TO BE RETESTED BY EU

British manufacturers selling goods ranging from machinery to toys into the European Union would also need to have their products retested by EU safety regulators in the event of a "no deal" Brexit.

Currently British manufacturers of many goods are subject to the EU's "New Approach" rules that ensure products sold across the bloc meet its safety and environmental standards.

The goods covered by the latest Brexit paper include construction products, lifts, toys and machinery. Road vehicles, aerospace and pharmaceuticals have been covered in separate papers.

"Products which were tested by a U.K.-based notified body will need to be retested by an EU-recognized conformity assessment body before placing on the EU internal market," the paper said of a no-deal scenario.

Conversely, Britain would allow goods that meet EU requirements to be sold in the British market without being retested, for a time-limited period, the government said.

And for those seeking to travel to Europe with legal firearms there could be an additional headache: the European Firearms Pass would no longer be available for British citizens.

DEAL OR NO DEAL?

As May tries to clinch a deal with Brussels, she is facing rebels in her Conservative Party who say they will vote down any deal that fails to deliver a sharp break with the EU.

Michel Barnier, the EU's chief negotiator, said on Monday that a Brexit deal was possible "within six or eight weeks" if negotiators were realistic in their demands.

Last month, the government published 25 technical papers out of a total of more than 80, which detailed how tariffs, financial services, state aid and pharmaceuticals would operate if Britain departs without a divorce deal.

Ever since the shock 2016 Brexit vote, major companies have been planning for Brexit, but chief executives say the scale of disruption from a disorderly Brexit is such that it is hard to prepare for.

Profit at Britain's biggest department stores group, John Lewis Partnership, was wiped out in the first half as it was forced to match discounting by its struggling rivals on a fiercely competitive high street.

"With the level of uncertainty facing consumers and the economy, in part due to ongoing Brexit negotiations, forecasting is particularly difficult," John Lewis said.

Brexiteers accept there is likely to be some short-term economic pain but say Britain will thrive in the longer term if cut loose from what they see as a doomed experiment in German-dominated unity and excessive debt-funded welfare spending.

Opponents of Brexit fear that leaving the bloc will weaken what remains of Britain's global influence, further undermine its reputation as a haven for investment and hurt the economy for years to come.