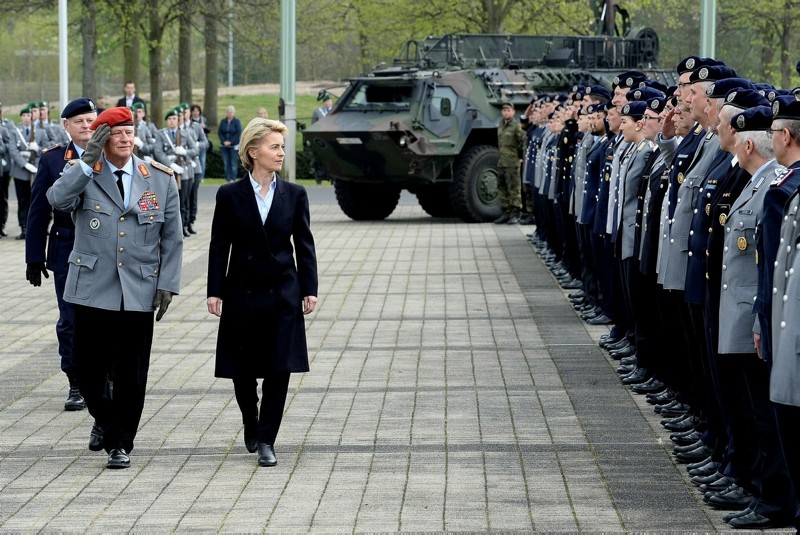 German Defense Minister Ursula von der Leyen on Saturday said she could not rule out a longer-term deployment of German forces in the Middle East, amid a broader debate about a role for Germany in a possible military action in Syria.

Von der Leyen spoke during a visit to the Azraq air base in Jordan where some 300 German troops support a refueling plane and four Tornado warplanes that fly reconnaissance missions as part of U.S. led-coalition operations against Daesh in Iraq and Syria.

Asked if Germany needed a strategic base in the Middle East, von der Leyen said, "First we must bring this deployment to a successful end. I don't want to rule the idea out, let me put it this way."

Von der Leyen and other German officials on Wednesday called for concerted efforts to prevent chemical weapons being used in Syria, and Chancellor Angela Merkel said Germany could not simply look away if such attacks took place.

The German government said it was in talks with the United States and other allies about possible participation in military intervention if chemical weapons were used in attacks on Idlib, the last major opposition-held enclave in Syrian.

The news has divided the German ruling coalition, with the Social Democrats, ruling any such action out unless it is sanctioned by the United Nations.

Germany, under pressure from the United States to boost defense spending and take on more responsibility within NATO, did not take part in April military strikes by U.S., French and British forces on Syria after a chemical weapons attack.

The United States has pledged to surpass that if Syria uses chemical weapons again.

Washington last month asked Berlin about its willingness to participate in military action together with France and Britain, if another chemical weapons attack took place. A leaked report about the query has triggered emotional debate in a country whose Nazi past keeps military action a sensitive issue.