French interior minister to step down in another blow to Macron 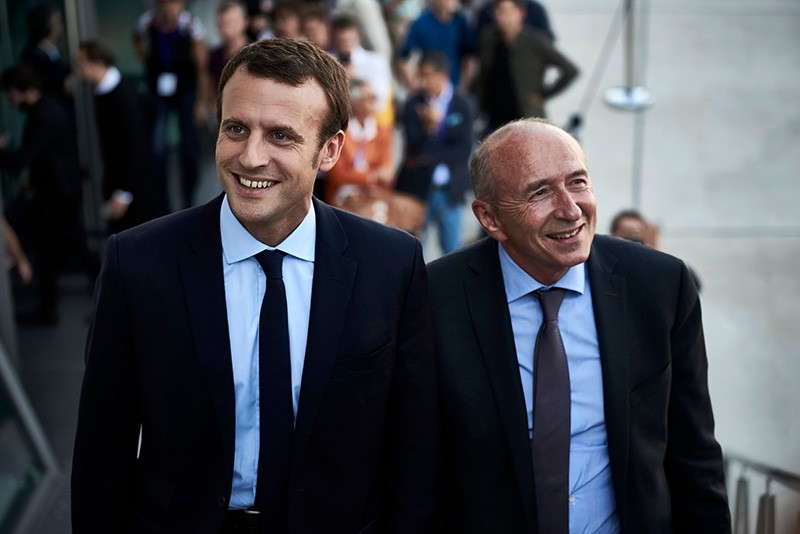 In this file photo taken on Sept. 24, 2016 then former French Economy Minister and founder of the political movement ,En Marche, (On the Move) Emmanuel Macron (L) and then Mayor of Lyon Gerard Collomb attend economics summit in Lyon. (AFP Photo)
by Sep 18, 2018 12:00 am

France's Interior Minister Gerard Collomb announced Tuesday that he would stand down after next year's European Parliament elections, in yet another blow to President Emmanuel Macron.

Collomb, one of Macron's most loyal ministers and a heavyweight in his cabinet, told news magazine L'Express that he would quit the ministry to run for his old job as mayor of Lyon in eastern France in 2020.

"The local elections are still far away -- I will run in Lyon if I don't get diagnosed as seriously ill anytime before that," Collomb joked.

"I won't be interior minister right up until the last moment. After a certain amount of time it would be better to be totally free for the campaign," he said.

"I think ministers who want to run in the 2020 local elections should be able to quit the government after the European fight," he said of the May 2019 European Parliament vote.

Collomb, 71, previously served as Lyon mayor for 16 years until Macron poached him for the interior ministry, and it has long been rumored that he was eyeing a fourth term running the city.

Rightwing opponents called on Collomb to step down immediately.

"France deserves a full-time interior minister, not a man who's only thinking about himself and is just doing the job part time," said Guillaume Peltier, a senior member of the Republicans party.

The news comes after Macron struggled through a major scandal this summer over revelations that his former bodyguard Alexandre Benalla roughed up protesters while wearing a police helmet.

Collomb became embroiled in the affair after it emerged he knew about the incident but decided it was not his job to inform prosecutors. Benalla has since been charged with assault.

Elected in May 2017 on a promise to reinvigorate the French economy, Macron has pushed through pro-business policies such as tax cuts for the wealthy but which have yet to bear much fruit, with growth forecasts recently cut to 1.6 percent of GDP this year.

The 40-year-old president, a former investment banker, also became embroiled at the weekend in the latest of a series of comments criticized as appearing out of touch with ordinary people.

Macron told an aspiring young gardener he could find him a job just by "crossing the street", in a restaurant or hotel.

A Kantar Sofres Onepoint poll released Monday found only 19 percent had a positive view of Macron, with 60 percent expressing a negative opinion.

Collomb has previously said he viewed Macron "almost as a son," but surprised political commentators this month by saying his government suffered from a "lack of humility."

A Socialist wooed into Macron's centrist government, he has been faulted by former leftist allies for his record in office, not least an immigration bill that was nonetheless seen by rightwingers as too lax.

Hulot, a TV presenter and veteran environmental campaigner, quit on August 28 -- live on the radio without informing Macron beforehand -- saying he felt "all alone" on green issues in the government.