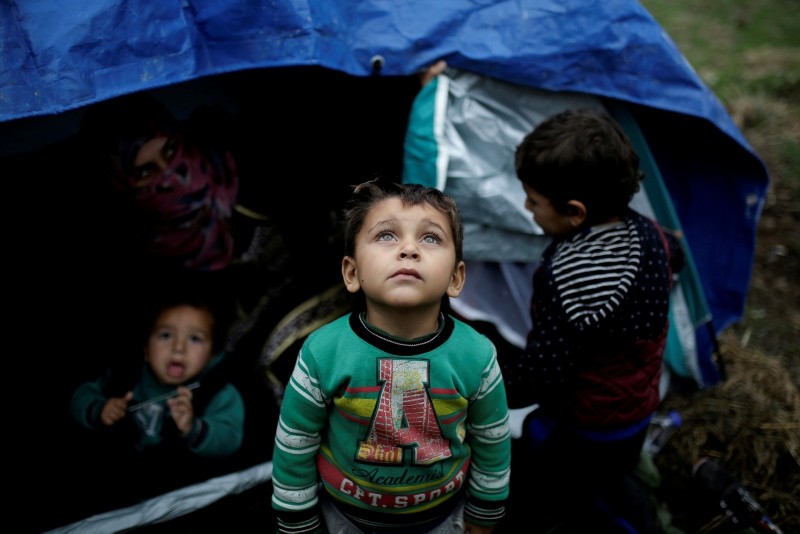 A Syrian refugee boy stands in front of his family tent at a makeshift camp for refugees and migrants next to the Moria camp on the island of Lesbos, Greece, November 30, 2017. (Reuters Photo)
by Compiled from Wire Services Sep 18, 2018 12:00 am

Greece said on Tuesday it would move 2,000 asylum-seekers from the island of Lesbos to the mainland by the end of the month as pressure mounted on the government to ease overcrowding.

About 9,000 migrants and refugees are holed up in the camp, a collection of tents and shipping containers in a former military base, according to the latest government data.

A local governor threatened to shut it down within 30 days unless authorities clean up uncontrollable amounts of waste.

"The situation in Moria really is difficult," government spokesman Dimitris Tzanakopoulos told a briefing. "It really is borderline."

Some 3,000 people were transferred from Moria to the mainland over the summer and another 700 people were moved last week, Tzanakopoulos said. A further 2,000 would be moved by the end of September, he said.

Doctors Without Borders (MSF) on Monday called for vulnerable people living in refugee camps on Greek islands to immediately be evacuated to the mainland or within the EU as attempted suicide and other self-harming is on the rise.

MSF said "numerous critical incidents" showed the "significant gaps in the protection of children and other vulnerable people", calling for the immediate evacuation of these groups.

"These children come from countries in war, where they have experienced very extreme violence and trauma," said Declan Barry, MSF's medical coordinator in Greece.

"Rather than receiving care and protection in Europe, they are instead subjected to ongoing fear, stress and episodes of further violence, including sexual violence," he added.

The MSF observed that between February and June of this year, 18 of the 74 children between the ages of 6-18 who attended a group mental health activity at the Moria camp harmed themselves, attempted suicide or thought about it, while other child patients that MSF has treated suffered from elective mutism, panic attacks, anxiety, aggressive outbursts or constant nightmares.

Due to a lack of accommodations at hospitals on the mainland, including in Athens, children cannot access care, the statement added.

"This is the third year that MSF has been calling on the Greek authorities and the European Union to take responsibility for their collective failures and to put in place sustainable solutions to avoid this catastrophic situation," said Louise Roland-Gosselin, MSF head of mission in Greece.

"It is time to immediately evacuate the most vulnerable to safe accommodation in other European countries," she added.