UK should not give preferential immigration treatment to EU citizens after Brexit: report 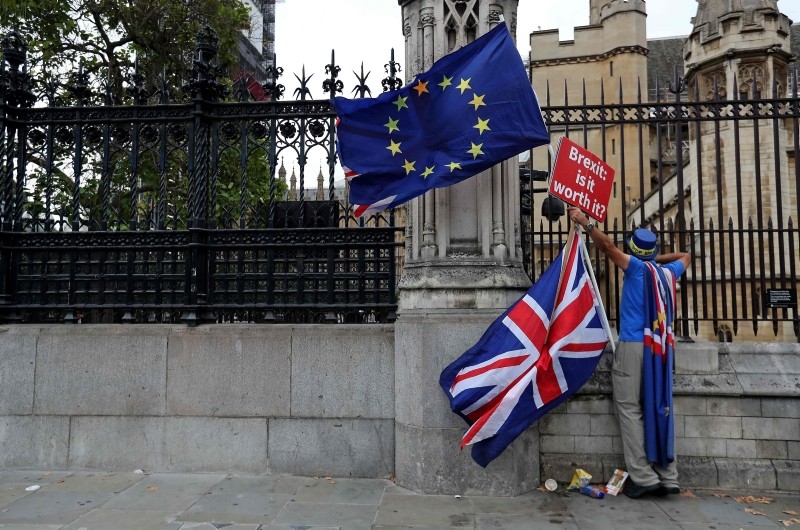 A demonstrator holds a sign that reads ,Brexit. Is it worth it?, whilst waving a European Union (EU) and Union flag, as he protests outside the Houses of Parliament in central London on September 11, 2018. (AFP Photo)
by Sep 18, 2018 12:00 am

Britain should not give preferential treatment to citizens from the European Union in its post-Brexit immigration system, a report commissioned by the British government said on Tuesday.

The Migration Advisory Committee (MAC), an independent body which gives the government advice on migration, also said Britain should make it easier for higher-skilled workers to migrate than lower-skilled workers.

"We recommend moving to a system in which all migration is managed with no preferential access to EU citizens," the MAC said in a report, commissioned by the government to assess the impact on the labor market of leaving the EU and to make recommendations for a post-Brexit immigration system.

MAC said this would likely only be possible if immigration policy was not included in Britain's deal on its future relationship with the EU.

Concerns about immigration were a key driver behind the 2016 Brexit vote. Prime Minister Theresa May has pledged to end unrestricted freedom of movement when Britain leaves the bloc but has so far given little detail on what the rules will be.

With just over six months until exit day, Britain is yet to reach a divorce deal with Brussels. If an agreement is reached, Britain and the EU have said that people will continue to be able to move, live and work on the same basis as now up until the end of a transition period in December 2020.

Net migration of EU nationals into Britain has already fallen markedly since the referendum, with official figures in August showing levels fell to their lowest since 2012 in the year to March.