‘Fort Trump’: Poland urges US to consider setting up permanent base 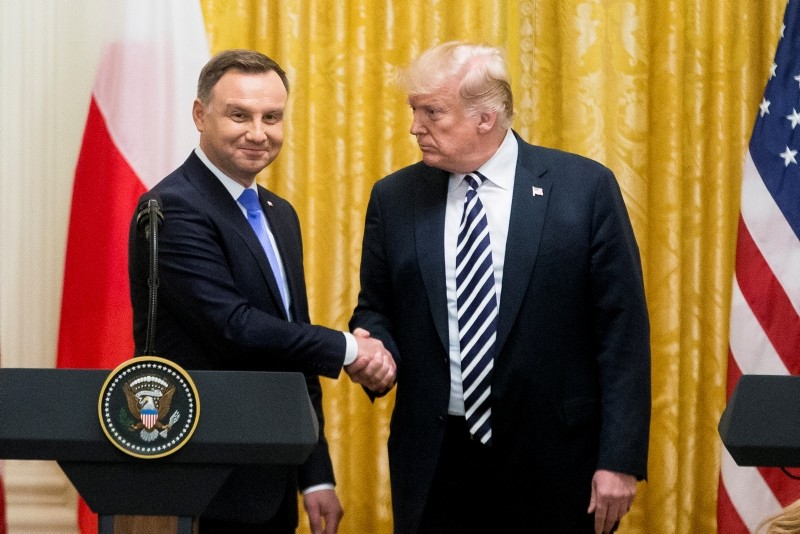 Poland's leader pressed President Donald Trump on Tuesday to consider creating a permanent American military base in Poland, offering a tempting incentive: The installation would be called "Fort Trump."

Polish President Andrzej Duda extended the invitation during a one-on-one meeting with Trump at the White House that focused heavily on the U.S. presence in Poland as the country faces Russia's increased military activities in the region.

Trump said during a joint news conference with Duda that he was considering the idea and noted that Poland had offered more than $2 billion to the U.S. to pay for such an effort. Duda, for his part, came away confident that he had taken a major step toward lining up a permanent American military base in his country.


"I was smiling when talking to Mr. President. I said that I would very much like for us to set up a permanent American base in Poland which we would call Fort Trump," Duda said through a translator, prompting Trump to raise his eyebrows and smile. "And I firmly believe that this is possible."

Seeking a check on Russian aggression, Poland wants the 3,000 U.S. troops now deployed in Poland on a rotating basis to be upgraded to a larger, permanent presence. A decision from the U.S. could come early next year.

"There is a whole range of arguments in favor of the fact that the presence of the US armed forces in this area is absolutely justified," Duda said.

Trump — accused by political opponents of having colluded in a shadowy Russian operation to aid his surprise 2016 election win against Democrat Hillary Clinton — agreed with Duda's assessment.

"I think it's a very aggressive situation. I think Russia has acted aggressively," he said.

And the White House reinforced that judgment, saying a partnership between the U.S. and Poland "is critical in light of growing security challenges characterized by aggressive Russian behavior."

Security, trade and energy topped the agenda as Trump welcomed Duda to the White House for the first time. Duda credited Trump for making Warsaw the first stop on the U.S. president's inaugural European trip last year and said Trump's outdoor address in Poland was a "very important moment" for the relationship between the two countries.

Trump said the two leaders agreed to bolster defense, energy and commercial ties, adding that the alliance between the two countries had "never been stronger."

During a meeting in the Oval Office, Trump renewed his criticism of a planned new natural gas pipeline linking Germany with Russia. Trump said it was "ridiculous" because it benefited Russia and was bad for the German people.

Poland wants to increase the volume of liquefied gas contracts with the U.S. as a way to cut its dependence on gas imports from Russia.