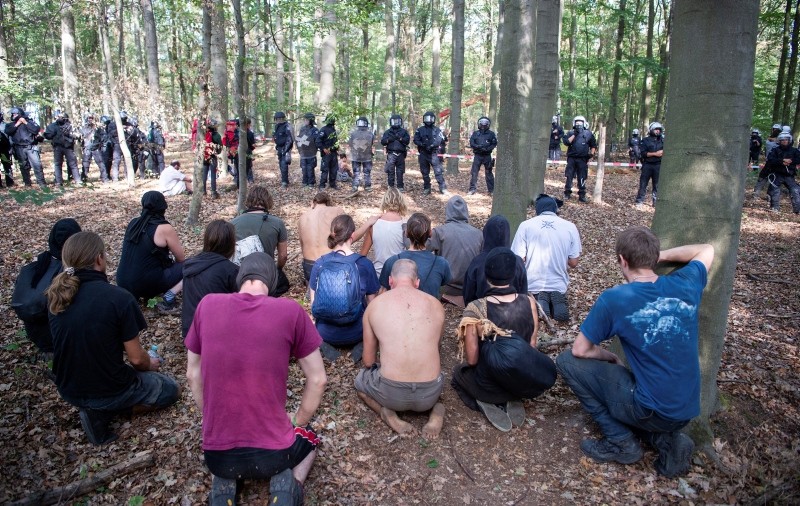 A journalist covering a protest against the clearing of woodland to make way for coal mining fell to his death near the German town of Kerpen on Wednesday.

Authorities in North Rhine Westphalia, the state in which the Hambach Forest lies, later in the day suspended police operations aimed at ending the protest "until further notice."

Police said the journalist, who had for some time been observing activists in the tree houses they had built in the forest, had fallen around 15 meters while negotiating a bridge suspended between two trees.

"I must stress that this accident was not connected in any way to the police operation concerning clearing the tree houses," Kemen said.

Reul called for investigators to be given time and calm to clear up the event.

The bridge apparently broke while the journalist was on it. Attempts to administer first aid proved fruitless and the man died at the scene.

Police immediately halted their operation to clear the forest which has been running for a week just to the west of Cologne. By Wednesday 39 of 51 tree houses had been demolished, they said.

The activist group "Hambi bleibt" (Hambi stays) is protesting plans by power generation company RWE to fell part of the forest to make way for an open-cast lignite mine. The protest, with tree houses as high as 25 meters, has been running for six years.

The activists claim the forest, with its centuries-old beech and oak trees, has a history going back 12,000 years and contains protected animal species, including Bechstein's bat, the agile frog and the hazel dormouse.

The group demanded an immediate halt to the clearance. "We urge the police and RWE to leave the forest immediately and to halt this dangerous operation," it said on its blog.

It described the journalist as a "friend who has been watching us in the forest for a long time." He had apparently been trying to get closer to where police were conducting their operations.

Police have not released his identity.

Police are investigating the incident and need time and space to do their work, a spokesman said.

The state prosecutor's office in Aachen was not able to say late Wednesday whether it had opened its own investigation of the incident.

In a statement, RWE regretted the journalist's death. "We are devastated and regret the tragic accident at Hambacher Forst," the energy firm said in a statement. "Our thoughts go out to his family."

Police say that since Thursday, they have removed 39 of 51 tree houses erected by protesters in recent years.