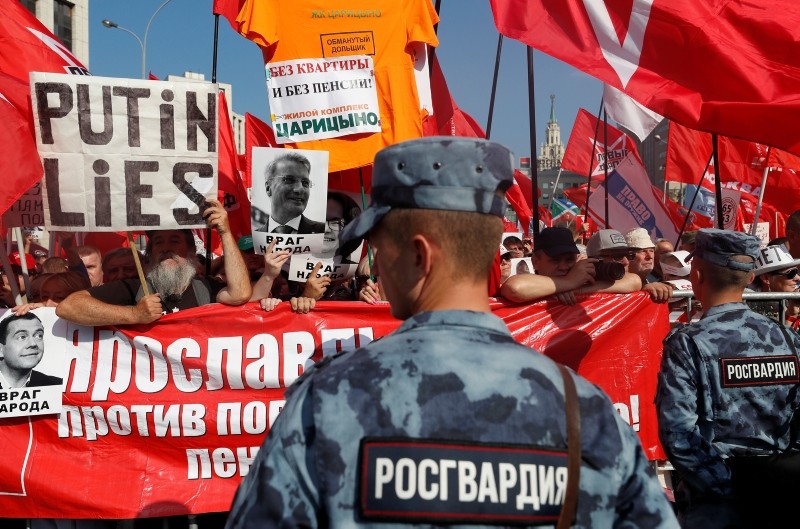 Thousands rallied across Russia on Saturday to protest the government's plan to raise the eligibility age for retirement pensions by five years.

Several thousand people attended a Moscow rally organized by the Communist Party and other leftist groups, which was authorized by city officials. Communist Party chief Gennady Zyuganov called for rolling back the proposed changes, arguing that the government should redistribute resources to avoid raising the pension age.

"They keep reaching into your pockets," he told the crowd, which had many waving red flags.

Similar protests were also held in many cities across Russia's 11 time zones and most of them were also sanctioned by authorities.

The demonstrations went on peacefully, unlike a wave of unauthorized pension protests earlier this month organized by opposition leader Alexei Navalny that led to the detention of over 1,000 people across Russia.

Navalny, the anti-corruption activist who is Putin's most visible foe, had called for protests against the pension age hike before he was sentenced to 30 days in jail for organizing a January protest over a different issue. He is set to be released from custody Monday.

The government's plan to lift the retirement age to 65 for men and 60 for women has irked a wide range of Russians from all political factions. Older Russians fear they won't live long enough to collect significant benefits while younger generations are worried that keeping people in the workforce longer will limit their own employment opportunities.

The proposal has dented President Vladimir Putin's popularity. He responded by offering some concessions, but argued that the age hike is necessary because rising life expectancies in Russia could exhaust the nation's pension resources if the eligibility age remains the same.