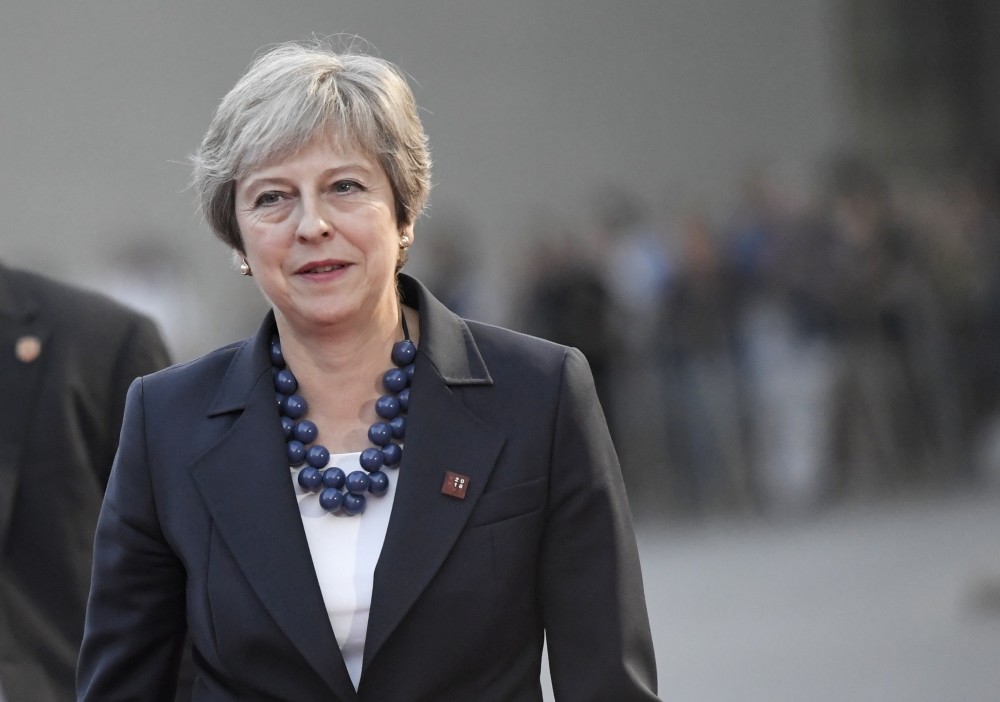 British Prime Minister Theresa May arrives for a dinner at the Felsenreitschule theatre, Salzburg, Sept. 19.
by Compiled from Wire Services Sep 22, 2018 12:00 am

The rocky Salzburg summit dashed British hopes of a breakthrough in stalled divorce talks, with just six months to go until Britain leaves the bloc on March 29

British Prime Minister Theresa May's Brexit blueprint was in tatters Friday, after the European Union rejected it at a summit in a move that the U.K. media branded a "humiliation."

After a dinner of Wiener schnitzel in Salzburg, EU leaders said they will push for a Brexit deal next month but warned May that if she will not give ground on trade and the Irish border by November they are ready to cope with Britain crashing out. European Council President Donald Tusk said bluntly at a meeting in Salzburg, Austria, that parts of May's plan simply "will not work," while French President Emmanuel Macron called pro-Brexit U.K. politicians "liars" who had misled the country about the costs of leaving the 28-nation bloc.

A rattled May insisted that her plan was the only one on the table — and that Britain was prepared to walk away from the EU without a deal if it was rejected.

Despite all the heated British rhetoric, the EU's position is not new. May's "Chequers plan" — named for the prime minister's country retreat where it was hammered out in July — aims to keep the U.K. in the EU single market for goods, but not services, in order to ensure free trade with the bloc and an open border between the U.K.'s Northern Ireland and EU member Ireland.

For the British media, the message was clear. "Your Brexit's broken," the Daily Mirror newspaper said on its front page. British newspapers led their front pages with a Reuters picture showing May, attired in a red jacket, standing apparently aloof and alone from a mass of suited male EU leaders. "May humiliated," The Guardian newspaper said. "Humiliation for May," said The Times on its front page.

The negative headlines indicate the extent of the divergence in perceptions between London and the capitals of the EU's other 27 members on the future of Brexit.

EU officials have been cool on the plan from the start, saying Britain can't "cherry-pick" elements of membership in the bloc without accepting all the costs and responsibilities. Yet British politicians and diplomats were taken aback by Tusk's blunt dismissal of the Chequers plan on Thursday — and by his light-hearted Instagram post showing Tusk and May looking at a dessert tray and the words: "A piece of cake, perhaps? Sorry, no cherries."

Despite negative comments, European Commission President Jean-Claude Juncker sought to calm any hurt feelings but called for caution, comparing Britain and the EU to two loving hedgehogs. "We're not at war with Great Britain," Juncker told the Austrian daily Die Presse in an interview published a day after the Salzburg summit, as reported by Agence France-Presse (AFP). Asked whether the British people should have another say on the exit deal once it had been agreed, Juncker said May had made it clear in Salzburg that there will no second referendum. "Nevertheless, the British parliament must vote on the exit deal, and the EU parliament, as well. And not everything that London likes is liked by the EU parliament. One has to look closely for common ground."

Britain is due to leave the European Union on March 29, yet little is clear: there is, so far, no divorce deal, rivals to May are circling and some rebels have vowed to vote against a possible Brexit deal. Both London and Brussels say they want a divorce deal, though there is limited time if the British and EU parliaments are to ratify a deal by March 29. Any deal must be approved by British lawmakers.