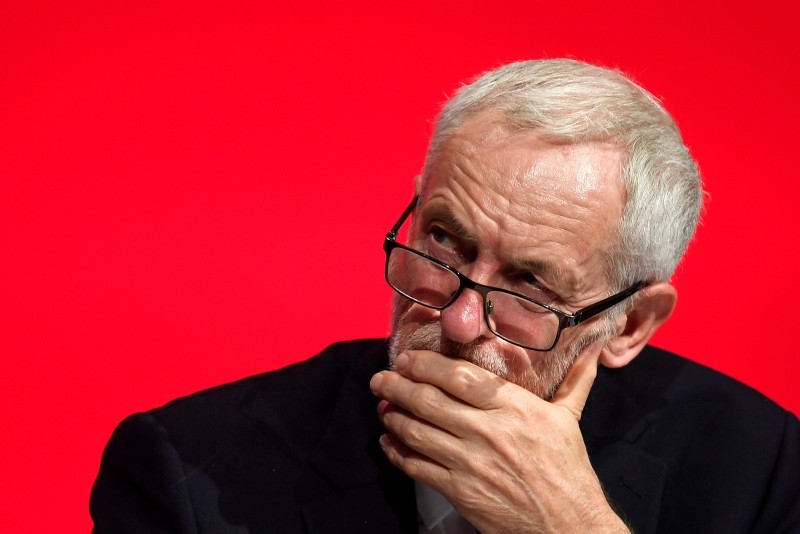 British opposition leader Jeremy Corbyn said on Sunday he would back a second Brexit referendum if his Labour Party votes to pursue the move, heaping pressure on Prime Minister Theresa May whose plans for a divorce deal with the EU have hit an impasse.

Corbyn, a veteran eurosceptic, has resisted growing demands to back a new "People's Vote" on the decision to quit the European Union, keen to keep those party members on board who voted in favor of Brexit at a 2016 referendum.

But the political landscape has changed since May's plans for Brexit - the biggest shift in British policy for more than four decades - were resoundingly rebuffed by the EU on Thursday, with any outcome of the negotiations more uncertain than ever.

With talk of a new election swirling after May's "Chequers" plan was all but shredded at an EU summit last week and chances of a disorderly departure that could damage the economy rising, the opposition party is under pressure to set the Brexit agenda.

At Labour's annual conference in the northern city of Liverpool, Corbyn, who in 1975 voted "No" to Britain's membership of the then-European Community, said he would act on the result of a debate in Labour on a second Brexit vote. But he was clear that he preferred a new election.

"Our preference would be for a general election and we can then negotiate our future relationship with Europe but let's see what comes out of conference," he told the BBC's Andrew Marr Show, saying Labour was ready to vote against any deal.

"Obviously I'm bound by the democracy of our party."

Labour is expected to discuss several motions on Brexit at its conference, and it remains unclear what the proposal on a second referendum might be - it could be a clear backing of a vote or something less black-and-white.

Corbyn has long said that a "People's Vote" is not off the table for his party, and a source close to the leadership urged caution over an as-yet unknown motion, repeating the Labour leader's stance that he does not support a second referendum.

Len McCluskey, a Corbyn ally and leader of Britain's biggest trade union Unite, further muddied the water when he said any such second referendum "shouldn't be on: 'Do we want to go back into the European Union?'", adding people had voted in 2016 when Britain backed leaving the EU by a narrow 52-48 percent.

Corbyn wanted his conference to be an opportunity to sell his alternative vision for Britain's economy, pressing his argument for the renationalization of rail, mail and utilities, and to rally the party for a possible early election.

But with Britain due to leave the EU in March, Brexit was likely to dominate the conference.

After weeks of both EU and British officials making positive noises about the prospects of clinching a divorce deal and one on a future trading relationship, the mood turned sour on Thursday in Salzburg, Austria when EU leaders came out, one by one, to criticize "Chequers" as unrealistic.

A tacit deal to try to offer her some support before she heads to what is going to be a difficult annual conference of her Conservative Party later this month was broken by some British diplomatic missteps.

May says she will hold her nerve in the talks, pressing the EU to come up with an alternative proposal to her Chequers plan, named after the prime minister's country residence where a deal was hashed out with her top ministers in July.

But the impasse with the EU has prompted some to predict an early election, with local media reporting that May's team has begun contingency planning for a snap vote in November to save both Brexit and her job.

Brexit minister Dominic Raab again ruled out a new vote, describing the suggestion as "for the birds".

While saying she will stick to her guns, May might have little chance but to change tack after a party conference where the deep divisions over Europe that have riven her Conservatives for decades will be in plain sight.

A senior pro-EU Conservative lawmaker, Nicky Morgan, said May would have to give ground on trade and customs arrangements with the EU to overcome the biggest hurdle to a withdrawal accord - the prevention of a hard border between the British province of Northern Ireland and Ireland, a member of the EU.

"I am not sure there is life left in Chequers," Morgan, chair of parliament's Treasury Select Committee and a former cabinet minister under May's predecessor, told Sky News.

And with the governing Conservatives in disarray, there are growing calls for Corbyn to take the lead - something he said he was ready to do if May did not get her deal through parliament.