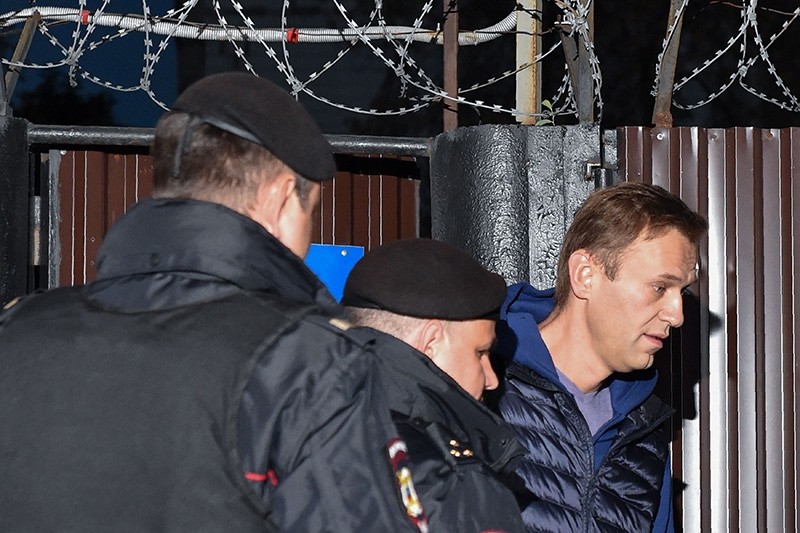 Russian opposition leader Alexei Navalny was detained Monday on his release from prison after serving a 30-day sentence for an unauthorized protest, his spokesperson said.

"Alexei Navalny was detained outside the detention center," Kira Yarmysh wrote on Twitter, adding that the politician was taken to a central Moscow police station.

Yarmysh said Navalny faces charges of staging a rally that caused bodily harm to unidentified people and faces up to 20 days in prison. He is due to appear in court later on Monday, she said.

Navalny was in jail for a month for a protest he organized on Jan. 28, violating Russia's strict laws which forbid any public event without city hall's authorization.

He accused authorities of sending him to prison to keep him from holding a protest on Sept. 9 against the government's retirement age hike that coincided with local elections.

Thousands of Russians across the country turned up to the protest and police arrested 150 people nationwide.

The opposition politician has criticized the pension reform that has led to a rare outburst of public anger in Russia and a dip in President Vladimir Putin's approval ratings.

Navalny has been the driving force behind a recent series of anti-government rallies that were held in dozens of cities and towns across Russia's 11 time zones. His anti-corruption rhetoric is especially popular among younger people who follow his online channels and blogs.

He was barred from taking part in Russia's presidential election in March and served a month in prison in June after organizing demonstrations ahead of Putin's fourth inauguration in May.

He was freed from prison the same day the World Cup started in Russia.

The Yale-educated lawyer has faced a string of charges since he became the leading opposition figure in Russia, campaigning against Putin's rule at mass demonstrations in 2011 and 2012.

Navalny's further detention comes amid a wave of popular discontent against a hike in the retirement age, an issue that angered Russians across the political spectrum.

A drop in approval ratings for President Vladimir Putin and outrage at the changes in the pension system have weighed heavily on Kremlin candidates running in regional elections in Russian regions.