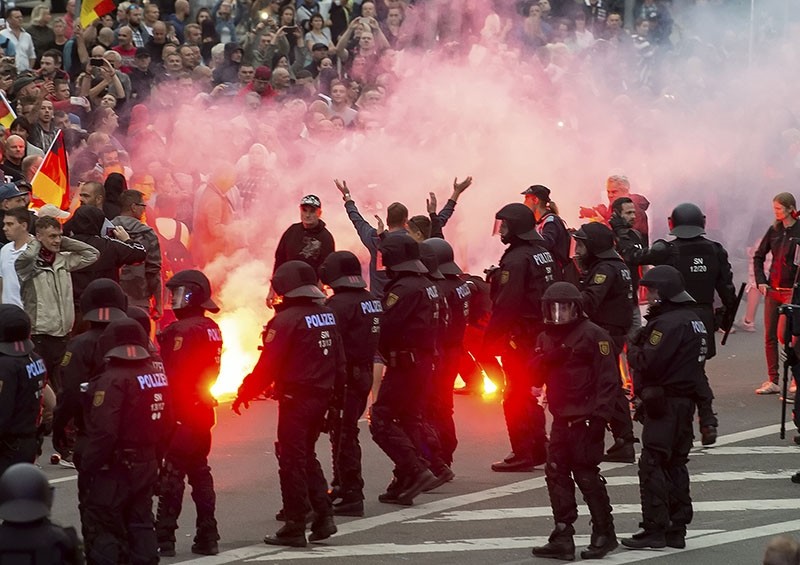 German police have arrested seven men on suspicion of forming a "far-right terrorist organization" in the eastern city of Chemnitz and planning to carry out attacks against foreigners and political enemies, officials said Monday.

Six of the men, all German citizens aged between 20 and 30, were arrested Monday by tactical police units in Saxony, the state in which Chemnitz is located, and Bavaria, federal prosecutors said in a statement.

The men are alleged to have formed a group calling itself "Revolution Chemnitz," together with a seventh suspect who was arrested in a separate case last month. The seventh man, identified only as 31 year-old German citizen Christian K. for privacy reasons, is alleged to have been the group's leader.

"Based on the information we have so far, the suspects belong to the hooligan, skinhead and neo-Nazi scene in the area of Chemnitz and considered themselves leading figures in the right-wing extremist scene in Saxony," prosecutors said, Reuters reported.

Prosecutors said the men wanted to "carry out violent and armed attacks against foreigners and political enemies" as part of a plan to overthrow Germany's democratic order.

Five of the men — Christian K. and four others identified only as Sten E., Martin H., Marcel W. and Sven W. — allegedly attacked several foreigners in the center of Chemnitz on Sept. 14, armed with bottles, weighted "sap" gloves and an electric stun device. Prosecutors said the attack was a "test run" for another attack the men planned for Oct. 3, Germany's national unity day.

Prosecutors didn't specify whether the group was linked to anti-foreigner violence that erupted after a German man was killed in Chemnitz in August. A 23-year-old Syrian is being held on suspicion of manslaughter in that case. An Iraqi man is also being sought over the killing.

A kosher restaurant was also attacked on the sidelines of one protest, with masked men throwing stones and bottles and yelling "Jewish pig, get out of Germany."

German Justice Minister Katarina Barley cited the arrest as further evidence of the threat posed by far-right extremists, after the conviction of members of the Freital Group and the National Socialist Underground earlier this year.

"If the allegations are further substantiated, then investigators will have succeeded in conducting an important blow against far-right terrorism," she told the Funke newspaper group, as reported by the Associated Press.

The arrests once again cast an uncomfortable spotlight on extremism in Chemnitz, which is a stronghold of the far-right Alternative for Germany (AfD).

The violence in Chemnitz, where skinheads hounded migrants and performed the illegal Hitler salute in August, exposed deep divisions over Chancellor Angela Merkel's decision in 2015 to welcome almost 1 million, mostly Muslim asylum seekers. The events in the eastern city also strained Merkel's coalition government. Her conservatives and their Social Democrat (SPD) junior coalition partners could not agree what to do with the head of the BfV domestic spy agency, who questioned the authenticity of a video showing skinheads chasing migrants and was accused of harboring far-right views.

Germany's extremist "Reich Citizen" and "Selbstverwalter" sovereign citizen movements are rapidly growing and its members are prepared to commit "the most serious acts of violence," according to an earlier report from the Bild newspaper. "Reich Citizens" and "Selbstverwalter" refer to a loose grouping of people in Germany who do not recognize the authority of the current system of government. There is no unified structure and several groups use the names despite very different belief systems.